Team development and the power of MBTI Step II

"Earlier this year I met Alexis Hutson, an experienced coach and mentor specialising in the healthcare sector. Alexis was attending an MBTI Step II qualifying course and I was impressed with her work so invited her to follow up with us by sharing her post-qualification experience of Step II. We’re pleased to share her experience with you. You can find out more about Alexis including her experience at http://www.alexishutson.com.”
Penny Moyle, CEO at OPP

I’ve been coaching doctors using MBTI Step I for years now, but this summer I used Step II for team development with a group of clinicians and managers for the first time. I was curious to see how the behavioural emphasis of the tool would support the team’s development.

The team had already worked with MBTI Step I, and so they knew what they were (in terms of Best Fit Type). Now they needed to dig below the surface – they needed a deeper understanding about how they work as a team, and how that impacts their leadership. It’s important to note that they were not fixing dysfunction; they were building a stronger leadership team to support the whole organisation. 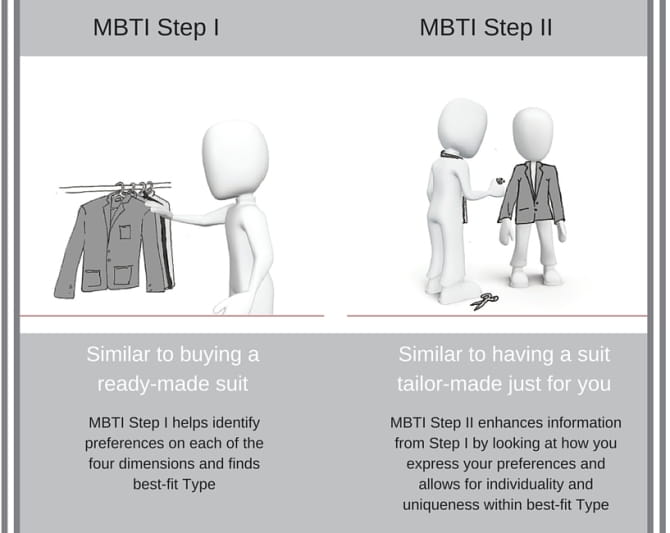 It was useful to approach the session by looking at specific areas for improvement, rather than running through the preference and facet pairs one at a time. The team could look back at the session with applications and actions in mind, which is always useful in making something ‘stick’ in real life. In this blog piece, I’ll cover some points from just two of the preference pairs: E–I and J–P.

The team of clinicians and managers includes both Introverts and Extraverts, but when we apply Step II and consider the out-of-preference facets, we see a more complex picture of Introversion and Extraversion.

Looking at the diagram below, on the left we see the Step I breakdown for the team. Two-thirds of the team are Introverts.

However, Step II tells us that within that group of Introverts, two thirds of them are out-of-preference on the Initiating and Expressive Step II facets (shown below on the right). 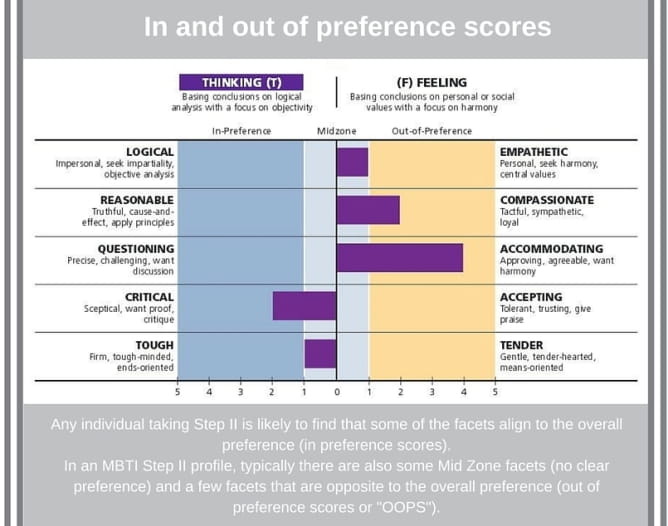 This means that within their organisation, the whole team is not perceived as they thought – they are perceived as an expressive, vocal team, yet their underlying preferences are quite different. By identifying this ‘mismatch’, the team can begin to understand some unexpected behaviour – for example, quiet colleagues becoming ‘unusually’ expressive about their views at times that didn’t make sense to some other colleagues. By making sense of out-of-preference behaviour, it is possible to understand when this is likely to happen and how to embrace its advantages while being mindful of the possible impact on others.

If the people around you think they understand your Type but experience something different, they may feel like they don’t understand you as well as they thought. Step II allows teams to get to know each other on a much deeper level – discovering why they sometimes seem out of character – and, therefore, strengthen their understanding of working relationships.

When looking at the Methodical and Emergent facets of the Judging and Perceiving preference pair, we found that the team had no coverage on the Emergent side despite being a mix of Js and Ps.

Often, we find that people’s experiences allow them to develop the ability to flex.  This had happened within this team to some extent, but it was not a facet that sat comfortably with any of the members. We spent time highlighting the most important scenarios in which they had to flex, and found that there were often discussions that required the Emergent facet to be exercised – times when they need to think on their feet and follow evolving ideas. By flexing and utilising the Emergent facet they could ‘go with the flow’ more comfortably; they could improve the perception of their team and make sure they are fully represented in these types of discussions.

There was also one facet within J–P which was highlighted by the team: Early Starting vs Pressure-Prompted. It came from an underlying tension in the team which needed to be explored ... why was one team member always late, even for the feedback session?

With Step II feedback, the team had a fair, positive forum to discuss the difference between the midzone colleagues and the Pressure-Prompted colleague. The strengths and challenges of both were discussed, and agreement was reached regarding the impact on the team.

This awareness was a real eye-opener for the Pressure-Prompted colleague who, now understanding the impact on his team, could consider the approach to certain situations in such ways as to benefit the team. This, again, would build trust within the team.

All in all, my curiosity about the behavioural aspects of Step II for teams has only deepened. In this session, we looked at only a handful of applications – many more could have made it into this blog piece – but I can’t wait to use this approach more and more for team development. The balance between using individual reports and discussing specific out-of-preference challenges was fantastic. The team took away a deeper understanding of themselves and their colleagues, plus specific actions to improve the areas highlighted at the start of the session.

By the end of our session the team understood where they needed to support each other further, and how and why they can work together more effectively. They also understood which aspects of leadership each member found energising or draining, and how to utilise this.

As an iNtuition-focused team, they agreed they needed more balance towards Sensing during team meetings and decision making.  They would benefit from using more facts, past experience, assessing what does and doesn’t work and what is realistic, on top of their natural focus on the future and possibilities. The Feeling preference also needed to be consciously considered.  The team needed to think more about the people involved in, and impacted by, decisions.

Step II lessons for next time

Would I do anything differently in future? One of the challenges, as always, was time. I found an hour was not long enough for the individual feedback sessions, and I’d also aim to have more time for the team development session. It’s always useful to revisit Typies and Step I, but you do need time for the Application Profiles worksheets.

The small and intimate nature of the environment we worked in had a positive impact on the team’s observations and ideas to take forward, including the tensions which came from their Pressure-prompted colleague. They really enjoyed this and it strengthened their trust and commitment to continue to support each other.

Have you got a team development story you want to share?

We’re always interested to learn from our community so get in touch with OPP or leave a comment below.

Create your free Team Typie (you will need to complete a Personal Typie for each team member before creating your Team Typie).

Facet Poster - used to display a team’s scores on each of the twenty MBTI Step II facets.

Posters to understand a team’s profile in the context of communication, decision making, managing change and managing conflict.