Decisions and Brexit: are you Tough or Tender?

Article 50 has been triggered, and we have embarked on a journey set to end in just two years’ time. Brexit will have profound consequences, so it may be difficult for us to ‘step outside’ and see the process dispassionately (given our individual personality type preferences, perhaps especially difficult for some of us). But in one sense, the next two years is a time of great opportunity – for the student of human behaviour. For example, the interplay of the different leadership styles of our senior politicians will make an interesting case study, and it is fascinating to see the Sensing–iNtuition dimension of the MBTI model playing out in the way that information is presented and then re-interpreted (and, indeed, in the response to the referendum question itself). Possibly one of the clearest examples, though, can be seen in the way people make decisions.

MBTI practitioners will know that the key personality type dimension here is Thinking–Feeling – our preferred way of making decisions. People with a preference for Thinking will usually attempt to make decisions by stepping outside the situation in order to make the decision in a logical way, on the basis of objective criteria. For people with a preference for Feeling, the important thing is to make a decision which is in harmony with their values, and which takes into account the people affected by the decision.

Just looking at Thinking–Feeling alone can give an insight into people’s reactions to Brexit. Take, for example, the issue of EU nationals living in the UK. Should the government keep this issue in play as a bargaining tool, or is this unfair to those EU nationals as individuals? However, we can gain more insight if we look in more detail at the way people tend to use their type. For this, we can go beyond the four-letter type of the MBTI Step I model and look instead at the MBTI Step II questionnaire.

The Step II model looks at our behaviour, how we express our four-letter type. For each of the four preference pairs, Step II has five facet scales, looking at the way in which we express our Extraversion or Introversion, Sensing or iNtuition, Thinking or Feeling, and Judging or Perceiving. These are the facet scales for Thinking–Feeling: 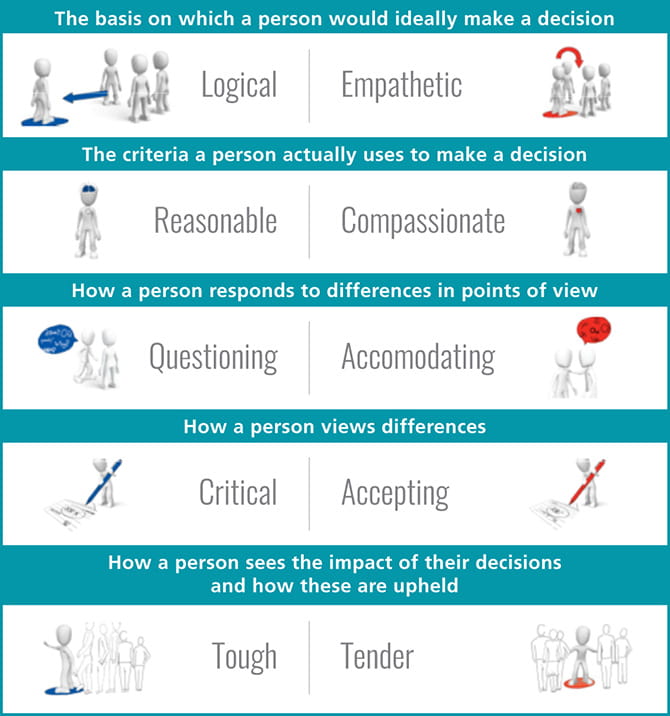 For example, let’s take the first two scales, Logical-Empathetic and Reasonable-Compassionate. We know that in the UK population as a whole, the average score on the Logical-Empathetic scale lies slightly towards the Logical pole, but the average score for Reasonable-Compassionate lies slightly towards the Compassionate pole. In other words, there will be a number of people who think that decisions should be made in a Logical way (and who are likely, in conversations about Brexit, to talk in these terms) but, when it comes to actual decision-making, will make their decisions in a Compassionate way. What people think should be done is not always what they do themselves, and therein will lie a great deal of misunderstanding over the next two years.

Tough-Tender is another interesting facet – and may not mean quite what you think. People scoring towards the Tough pole believe that once a decision has been made, alternatives don’t really exist and the decision should be driven through. People scoring towards the Tender pole believe that it is really important to get buy-in before moving ahead. People with either preference often do not understand the other point of view, which is something that we have already seen in the Brexit debate.

It is probably hopelessly naive to think that each side is going to take the time to consider where the other is coming from. Of course, that doesn’t have to stop us from thinking about how to use our knowledge of our own personality type in communicating more effectively with others in our day-to-day lives.