How to fail to achieve your organisational goals

It seems that hardly a week goes past at the moment without news of some new organisational failure or scandal. From cover ups in ‘moral leadership’ to a very public collapse, our papers and social media feeds are filled with stories of organisations struggling and failing to perform. 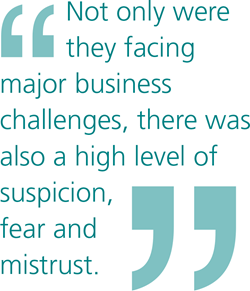 Clearly organisational failures like these are complex. I’m sure in the future many books, articles and business school lectures will be dedicated to analysing the multi-faceted, systemic reasons behind these failings. As a business psychologist, I can’t help but recognise the influence of human dynamics within organisations and the impact relationships have on business performance. Like many, I am left wondering how many of these high profile failures have human relationships and dynamics at their centre.

I frequently work with leadership teams facing considerable pressure to achieve ‘aspirational’ or ‘visionary’ performance targets. Often these teams are aware of the importance of building strong, accountable relationships in order to do this. However, the reality is that many of them are so focused on what they have to achieve that developing a healthy team dynamic loses priority.

An example of this is an Executive team I worked with recently. They were facing major market and stakeholder challenges within the utilities industry. During the initial team event, they appeared to be collaborative and supportive of each other, working through their agenda with positivity and efficiency.

It was only when I met with each of them individually that significant problems became clear. Not only were they facing major business challenges, there was also a high level of suspicion, fear and mistrust between the seven leaders. They admitted that despite the ‘polite’ and often jovial atmosphere of their meetings, they were working hard to consciously present a ‘polished’ image to their colleagues.

The reality was that the serious business challenges had paralysed them in a state of fear and they were unable to admit to each other how much they were struggling. Add to this a highly political, hierarchical culture and an unhealthy history of betrayal within the organisation and it was clear that this was not a healthy team environment conducive to collective success. 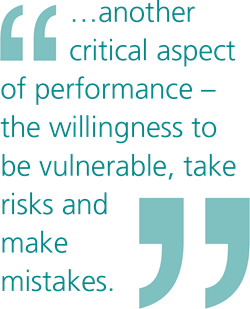 Lencioni’s model of team dysfunction is now well known, but I frequently come back to this with the teams that I work with. The reason I find this model so powerful is that it makes explicit the importance of trust within teams as a foundation for achieving results. It highlights the importance of celebrating differences between team members – in personality and style but also in views, experiences and perspectives – in order to generate healthy decision-making. Where these differences are held constructively, teams are able to have difficult conversations, give each other feedback, challenge each other and ultimately commit to joint goals they hold each other accountable for.

In recent years, neuroscience has taught us much about the impact of fear upon cognitive functioning. This has highlighted the role of the stress hormone cortisol in prompting ‘survival’ behaviours rather than the rational, creative behaviours needed in organisational life. Much of my work with teams, including the Executive team mentioned previously, is to encourage a culture of ‘psychological safety’ between colleagues. Differences are seen as a positive and constructive foundation for healthy debate rather than promoting fear, suspicion and, potentially, a sense of competition for survival.

High levels of psychological safety within teams also promotes another critical aspect of performance – the willingness to be vulnerable, take risks and make mistakes. In her recent book, Thrive, Arianna Huffington highlights the importance of affirming and celebrating our humanity within our organisations. There is a focus on our need to connect with each other in an authentic way in order to thrive and perform at our best. Clearly, part of this authentic connecting is being able to accept, and work with, that most human of characteristics – the tendency to make mistakes.

Where teams have trusting relationships between colleagues, taking risks is more acceptable knowing mistakes can be worked on collectively. It also means that honesty about individuals’ strengths and weaknesses may lead to a greater level of support between colleagues. There is even a greater ability to say ‘sorry’ when mistakes have caused harm to each other and the business. Without the willingness to make mistakes, teams can become superficial, paralysed and ultimately unable to work together collaboratively on complex organisational issues.

We don’t yet know the precise causes of recent public failures and cover-ups of organisations. Given the frequency with which I encounter fear and mistrust within teams, I am fairly confident that these themes were present within at least parts of these organisations. While it may seem challenging and time consuming to commit to building healthy team dynamics, it is clear that the costs of not doing so can be catastrophic for business performance. When teams invest in transformational psychology-based development, they are more likely to enforce the strong, relational cultures required for optimum success in today’s uncertain and ever changing world.

Find out more about human dynamics in business