‘Opposites attract’ is a well-known phrase, but why is it that some opposites grow closer and flourish over a lifetime while others grow apart? 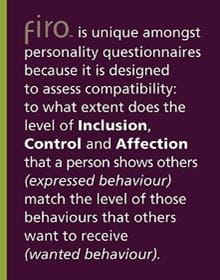 When I was creating the world’s first FIRO-B qualification programme, I was on the lookout for a case study to demonstrate how perfectly suited the FIRO instrument is to understanding interpersonal compatibility. In this blog we’ll explore that case study 20 years on.

Friends of mine, Sandra and Terry (names have been changed), were up for the challenge and agreed to take the FIRO questionnaire to see what light it would shed on their relationship. The case study has been used ever since on OPP’s FIRO Qualifying Programme, providing balance with other work-related case studies.

Back then, Sandra was an event manager and Terry a computer programmer. It was easy to see that Sandra’s high scores for both expressed and wanted inclusion could be an asset in a job with a high demand to form and join new project teams and meet and greet event sponsors. She is (still) gregarious and will strike up a conversation with just about anyone (which both horrifies and fascinates Terry). Terry doesn’t need or want much contact with others, as shown by his low Inclusion scores (below), and this works fine in his job which requires long periods of quiet concentration on code. He can be sociable but he is highly selective about who he wants to socialise with: this selectivity is typical of those with low scores. So how did the orbits of these two very different people collide such that they became an item?

Sandra and Terry met at a conference when they were both good looking twenty-somethings. Sandra was organising the event and Terry was one of the speakers. She was attracted by his self sufficiency, intellectual confidence and quiet refusal to conform (low wanted control): she saw him as the strong silent type and relished the challenge to get him to open up. He was attracted by her easy going nature, warmth and social poise – a real case of opposites attract!

How does this relate to the FIRO-B scores? 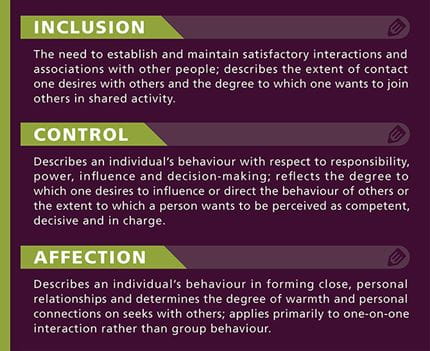 Initially their relationship blossomed, driven partly by what is often the most powerful part of a FIRO profile – the affection scores.

While Terry was very cautious about who he was warm and open with (expressed affection: 1), he actually wanted to receive a moderate amount of affection (4). One of the great strengths of FIRO is highlighting this area of difference: Terry was something of a cautious lover. He wished he had more close relationships but found it hard to get to the point where he could trust another person enough to open up. Part of this was the result of a painful relationship in the past where he had been badly let down by a close friend. Most people assumed he didn’t want close friendships. Sandra blasted through his reserve and met his needs with her 5 for Expressed Affection.

In the area of Control there was a degree of compatibility. While Terry had a very high Expressed Control score, he had most of his Control needs met at work, taking on a lot of responsibility and leading challenging projects. There was a reasonable match with Sandra’s Wanted Control (5) and she liked his decisiveness and certainty. Also, with an Expressed Control score of 3, Sandra didn’t have a great desire to control Terry which suited him well (his Wanted Control score, 0).
As their relationship developed, areas of incompatibility began to rub. It was around this time that they took the FIRO-B questionnaire and I gave them feedback separately before the three of us explored their profiles together.

Sandra found Terry antisocial and was frustrated that he always seemed to be working. He didn’t want to go out and didn’t like it when she brought friends and colleagues home, retreating quickly to his office and his computer. He constantly felt his home was being invaded by strangers: for him there were people he saw at work and a select group of friends he had known for years who he saw outside work, he never mixed the two groups. He liked his time to be unconstrained particularly at home and hated it when Sandra made social commitments for him. Over time Sandra spent more and more time out with her friends and they spent less and less time together.

What did the FIRO-B case study highlight for them?

FIRO insights gave them a language to talk about their differences and they realised that they had evolved a way that each could meet their Inclusion needs but at the expense of their relationship. They agreed they needed to spend some time together. Sandra committed to spending a least three evenings a week at home and Terry committed not to work those evenings. Terry also joined the same amateur dramatic group that Sandra belonged to. He worked on the lighting design and could concentrate quietly while Sandra performed on stage. This gave them a common interest to talk about.

Their Affection scores reflected the reality of Terry getting his needs met by Sandra, but Sandra feeling short changed by Terry’s reluctance to regularly give her small signs of affection. She began to doubt how Terry felt about her. Terry found it difficult to be open about his feelings, it made him feel vulnerable, even with Sandra, and as a result he was frustrated by what he saw as Sandra’s constant need for reassurance. Sandra picked up Terry’s irritation and, thinking she was being too effusive, tried matching the level of openness and affection Terry showed. The upshot was each thought the other had lost interest IN them. FIRO helped to cut through this painful and destructive dynamic, allowing them to see where mixed messages where pulling them apart and recognising what they each needed.

Although they have moved away, I am still in touch with Terry and Sandra. They are still together, happy and with three almost grown up kids. Terry asked if he could take the FIRO questionnaire again and I was not surprised that some of his scores had changed. He has changed in some important ways and I’d expect that to be reflected in his FIRO profile. FIRO is different from assessments such as the MBTI tool, where your personality is the same throughout life (albeit with that  personality Type developing over time).  FIRO assesses behaviours which can change, and over 20 years and many formative life experiences later, it is not surprising to see changes in FIRO scores.  Making sustained changes to behaviour is hard; the first step is the self awareness and FIRO feedback is a very powerful way to start the journey.

Terry puts the changes down to both his work and his family, and was most proud and happy about his score of 4 on expressed affection....and so is Sandra.

Why’d you do THAT?! Interpersonal needs and motivations

What do you want from me? How understanding motivation can lead to more effective behaviour

What’s going on under all the forming, storming and norming in teams?

We'd love to hear your thoughts so leave a comment below.