Watch out: overconfident opinion leaders about! 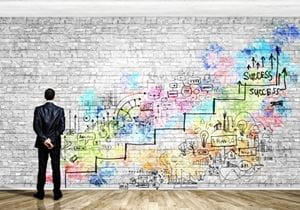 Few people would argue against the concept of thought leadership. Not listening to the views of leaders in our field, or ignoring ideas for better ways of doing things, is hardly a recipe for success. However, individual opinion leaders don’t always get it right, and the catch is that those who sound most confident in their pronouncements aren’t necessarily the most accurate.

Psychological research tells us that experts who sound confident and authoritative are listened to more and believed in more fully, but are also the most likely to get things wrong. And of course many of those acting as opinion leaders aren’t really experts, or showing thought leadership; they may be ‘personalities’ who can use their public popularity and communication skills to sway opinions without necessarily having any expertise whatsoever. The expert who is a little diffident, and who explores the possibilities and probabilities rather than giving an immediate answer, is the one we should be listening to more. But we tend not to – at best we find our eyes glazing over, and at worst we dismiss them as uninformed, vacillating, or just plain stupid.

Not basing your judgements on the quality of the oratory is a good rule of thumb; it’s generally wise to be a little suspicious when an opinion is presented with great confidence. Confidence in itself tells you nothing at all about truth or accuracy. The expert might sincerely believe they are right, and may even have plenty of expertise, and these are things we instinctively respond to in a positive way. But it always pays to take a step back, engage your brain, ask questions and work out if they really do know what they are talking about.

When you are faced with a less confident opinion leader, do something similar: ask them questions too. You might discover that they are more of an expert than you initially judged them to be.

The negative effects of an overconfident expert are often exacerbated by ‘group think’. In the rush to make decisions, inconvenient information or viewpoints that disagree with the story constructed by the thought leader are often ignored. We also know from research that overconfident, dominant leaders can actively inhibit information exchange between members of a group, making the situation even worse.

In our own work with clients, we can help overcome group think with tools such as the MBTI® assessment. When we listen to an opinion leader, we need to evaluate what we are hearing and come to a conclusion. We all have a preferred mode of information that we pay attention to (Sensing or iNtuition), and a preferred way of making decisions (Thinking or Feeling), and will tend to rely on these while neglecting other possibilities. In a group where some Types are more common than others, this effect will become exaggerated. By making the group spend equal time on both their preferred and non-preferred styles, we can help them evaluate the suggestions of opinion leaders in a more rounded way, ultimately making better decisions. This approach also allows some of the quieter and more different voices in a group to be heard, when they might normally be drowned out.

Some would say that the old phrase caveat emptor – let the buyer beware – applies to thought leadership. Actually the truth is more complex - most opinion leaders are not attempting to sell snake oil, but genuinely believe themselves to be right. Do what you can to avoid confusing confidence with truth, and watch out for the effects of group think.