Conflict and leadership: what does the data say?

Leaders are quick, decisive, and know what they want; they aren’t afraid to make unpopular decisions and they can be fiercely competitive. This might be a somewhat old-fashioned view of leadership, but new research by OPP suggests there is more than a grain of truth here. 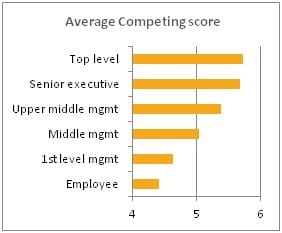 We looked at data from over 33,000 people who had completed the TKI™ (Thomas-Kilmann Conflict Mode Instrument) questionnaire. We found that the more senior an individual is, the more likely they are to use a Competing approach when it comes to handling conflict: out to win, hard bargaining, defending their rights, behaving in an assertive and uncollaborative way.

There are situations in which the Competing conflict mode can be appropriate – for example, in an emergency when quick, decisive action is vital, or if people need to protect themselves when they are under attack. But this is a style that has strong effects and it should be used sparingly: over-reliance on the Competing style brings particular problems for senior leaders. If leaders bring a competitive approach to all their interactions, those who work for them learn not to argue, leaving the leader surrounded by ‘yes’ men and women. Without the voice of a ‘critical friend’, they can begin to make uninformed decisions, with potentially disastrous consequences. And when things begin to go wrong, their instincts may be to defend their actions rather than to work with others to find a better solution.

Of course, Competing is not the only possible approach to conflict. The TKI looks at how you are likely to behave in a conflict situation depending on how assertive and how cooperative you are. Combining these two dimensions, there are five modes for dealing with conflict: 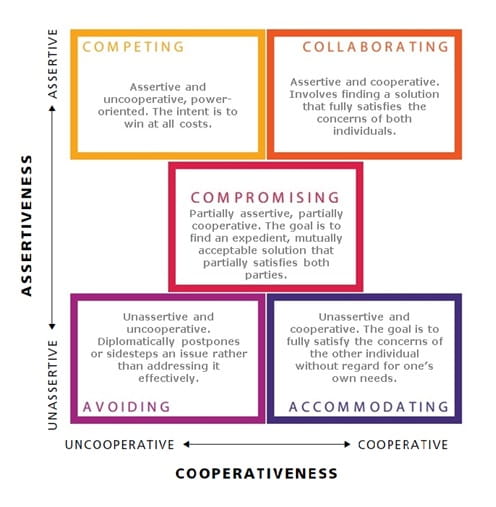 Each of the conflict styles has benefits when used in the appropriate conflict situation. For instance, Avoiding, a style very different from Competing, is useful where it is wise not to waste time and risk straining relationships on low-priority issues, (ie  it is important to judge which battles to fight). We probably all use each of the five modes from time to time. However, our conflict style is often based on habit or learned patterns of behaviour, rather than being a result of a conscious decision. This tends to result in certain conflict modes becoming overused. OPP’s research suggests that top-level leaders may be in danger of over-using the Competitive mode, and that non-managers may over-use Avoiding and Accommodating. This has important implications: new research by the CIPD shows that employees are more likely to have experienced conflict with their manager than with anyone else they meet at work, and that they rate these events as more serious than other workplace conflicts.

Whatever level we are at in the organisation, tools like the TKI can help us expand our skill set when dealing with conflict, raise our awareness of the mode in which we are operating, and improve our ability to respond in the mode that is the most appropriate for that situation.

OPP’s data was drawn from people in a wide range of both private and public sector organisations, and the findings are likely to apply to leaders in all walks of life. It could, for example, be instructive to reflect on how the behaviour of political leaders in the election debates might reflect on their wider conflict styles – and the implications of this for their behaviour once in office.