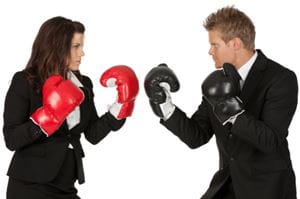 I would like to describe a simple method I've used to resolve the extreme polarization that can occur in high-intensity conflicts, where people have deeply stereotyped misperceptions of the other that remain frozen in time - and thus inaccessible. This simple method can also raise the empathy of both parties - to spend some time in the shoes of the other - as long as each party has some measure of emotional intelligence and mental health outside that polarized situation.

I ask each party to make three lists:

Ideally, these three lists are written on easel pad paper, so they can later be posted on the wall of the room, very visible and readable for all to see. Naturally, it's important to remind each party to be especially candid and to be as specific as possible in compiling their three lists, not evasive or general. They should also write very legibly. When the three lists are complete, they're posted on one wall in the room. Each party then takes turns presenting its list to the other. Then there is a brief period of 'clarifying questions' (no debate) to make sure that what is written on the lists is understood by all. This part needs to be facilitated, so the 'clarifying' questions are asked to understand what is written on paper (regardless of whether one agrees or disagrees with what has been put into words), but certainly not to attack its meaning or validity.

The 'fun' begins (yes, laughter finally seeps into the conflict situation) and the 'learning' begins (a few 'aha' moments are usually experienced) when each party is then asked to compare, firstly, how each sees itself versus how the other sees it; and, secondly, how each party sees the other versus how the other party sees itself. As can be expected, there usually are huge gaps in these perceptual comparisons, which is precisely what the conflict has been all about... perhaps the very root of the conflict. The parties are then asked to suggest what is the source of these large gaps: how did such huge misperceptions and distortions come about? In essence, this question helps the parties define the source of the problem, so both parties have a better chance of solving it.

At this point in the discussion, the different conflict-handling modes can be introduced (or reviewed) so the parties see that they have several behavioral choices regarding how they approach their gaps and long-standing conflicts: competing, collaborating, compromising, avoiding, and accommodating - particularly the fundamential differences between the distributive and the integrative dimensions on the TKI Conflict Model.

There might be no miracle here for parties whose prime motives are anger, rage, and hate toward the other, and that being locked into such perpetual combat satisfies more (pathological) needs than what would be experienced by coming to a peaceful resolution (since peace can throw some people's lives out of whack). In other words, some parties may need their prolonged conflict in order to maintain their familiar pain... and that's just the way they are - for now. But when there is at least a minimum desire or hope to satisfy healthy needs, so everyone can move forward in life, this simple method can help conflicted parties see the source of their debilitating misperceptions and thus gain a necessary dose of empathy, perspective, and peace.