The big picture and conflict management 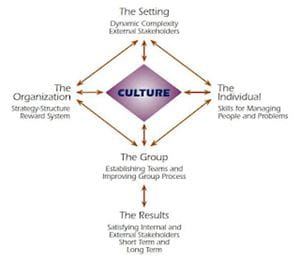 Here is a far-reaching question: What causes conflict? In particular, does conflict largely stem from differences within and between people? Or does conflict primarily arise from the attributes and forces in the situation, that is, the larger system within which people interact with one another?

In my experience, the great majority of the conflict we experience stems from the system – not the people. Indeed, if you replaced the employees in an organization and gave the new recruits sufficient time to learn their job and what is expected of them, it wouldn’t be long before the same conflicts arose. Soon, you’d even hear the same disagreements! As a rough estimate, I’d say that most conflicts are 80% system driven and only 20% people driven. Quality guru W. Edwards Deming repeatedly claimed that this ratio is closer to 85/15. So what is the system that creates conflict?

Many years ago, I developed a model, The Big Picture, as a way of capturing the source of all problems and conflicts. This Big Picture does acknowledge individuals – their different styles and skills for managing people and problems. But that, as I suggested, is only 20% of the equation. The remaining 80% consists of these interrelated, systemic aspects: the setting (dynamic complexity in general and the needs of external stakeholders in particular); the organization (strategy-structure and the reward system); the culture (the rules of the road that dictate “how things are done around here” and sanctioning systems that keep people in line with those unwritten rules); the group (the processes by which individuals get together and then address their problems and conflicts); and the results (satisfying internal and external stakeholders, short term and long term).

It should be apparent that most formal organizations (for example, businesses) have documented their strategy-structure and reward systems. Even informal organizations also have systems – but they aren’t written down. For example, families have implicit goals and strategies (to keep members safe, healthy, and nurtured), structure (the hierarchy and authority of parents), and reward systems (the consequences for misbehaviour). So every social system has the attributes of The Big Picture; they only differ on the scope of the system and what is documented for all to see.

While there is limited space here to detail all the sources of conflict with The Big Picture, consider a few:

Overall the external environment and the organization’s strategy, structure, reward system, culture, group process, and skills and abilities of its members are misaligned, which leads to widespread gaps between what is and what could or should be (hence conflict). Although it’s useful to give people insights and awareness about their five conflict modes, we must also provide them with a deep appreciation of The Big Picture, so that they:

For a more thorough discussion of The Big Picture, also called The Complex Hologram, seewww.kilmanndiagnostics.com/hologram.html.