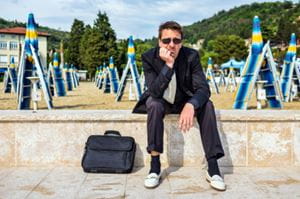 A longitudinal study published in the Journal of Applied Psychology has recently provoked my thought. The study examined the relationship between personality and worrying/rumination and the outcomes of university academics after they had taken annual leave. The authors wanted to understand the relationship between personality and how individuals maintained the benefits gained from taking a period of rest.

It was hypothesised that all participants in the study would benefit from having a break; it was also hypothesised that those who tended towards ‘self-critical perfectionism’ might be less able to sustain the benefits gained after a period of respite. Indeed, this is what the research results showed.

To try to understand the mechanisms behind these findings, the authors asked the study participants about their thoughts while they were on holiday. The self-critical perfectionists reported they tended to look back at past failures and worry about the future. One question remained. All the participants, regardless of their levels of self criticism and perfectionism, were able to relax. How was this so?

In the short-term, the authors reported the self-critical perfectionists tended to worry and ruminate about past actions. It was suggested that the worrying and rumination might temporarily displace uncomfortable feelings. In particular, those uncomfortable feeling might include an uncertainty of what might have occurred while they were away on leave. Additionally there was concern about what might occur when participants returned to work. However, in the longer-term, the anxiety and worry hindered the beneficial effects gained from taking annual leave.

Psychometrics provide a framework or a common language with which we can explore ourselves and raise self-awareness. In this instance, we could hypothesise that the ‘self-critical perfectionism’ reported in this study might be characterised by scales such as ‘Apprehension’ (Factor O) and ‘Perfectionism’ (Factor Q3) on the 16PF questionnaire. On the MBTI questionnaire, the Judging and Perceiving preferences might come into play (and indeed we know that there is a high correlation between the J-P preference and 16PF Perfectionism).

In terms of behaviour, a high degree of Apprehension would be characterised by experiencing more self-doubt than most. Perfectionism would be associated with placing a high degree of importance on planning and personal organisation. We know that those who have Judging preferences tend to prefer to reach closure. Those with a Judging preference are also likely to prefer for activities and events to be scheduled. On the other hand, those with a Perceiving preference prefer to leave their options open. In addition, those with a Perceiving preference are more likely to be flexible and spontaneous in their approach.

We know that those with preferences for IJ (with one exception: there are no significant correlations between O and Q3 and INTJ) may become stressed when they have to move away from familiar routes (ISTJ) or feel that they lack direction (ISFJ). They may also become stressed when their own desire to be a perfectionist is contradictory to common sense (INFJ). For these first two points, we could hypothesise that the act of going on annual leave could be a stressor. When returning to work, the desire for perfectionism in all tasks to be undertaken could stand to undermine the benefits gained from taking annual leave.

The authors suggested those who were self-critical perfectionists could try immersing themselves with engaging activities while they were on annual leave. The authors also suggested that Mindfulness and Cognitive Behaviour Therapy might be of benefit too.

With schools having broken up for the summer and families taking holidays, many readers may find themselves with time on their hands. For those who tend to worry and ruminate while on annual leave, why not try planning annual leave activities in advance? Perhaps those with preferences for ISTJ might find benefit from a new hobby or interest that you have long been curious about but have never had the time to undertake. Those with preferences for ISFJ might enjoy engaging with an activity where there is no set outcome. For example, this could include things like writing, drawing or painting. Alternatively, those with preferences for INFJ might try engaging their least-preferred function (the Sensing preference). This might involve taking the opportunity to get outside by going for a walk or bike ride and focusing on nature. By partaking in these activities whilst on annual leave (as opposed to worrying and rumination), the beneficial effects of a period of respite may well last longer once the return to work has been made.

Level B Intermediate Plus Course Notes

I would like to thank John Hackston for providing guidance in relation to keeping the language of this post as open and accessible as possible.