Personality, gender and the glass ceiling

Plain old-fashioned sexism could be part of the reason for this, but other factors have been suggested.  Women are more likely than men to have a more interpersonally oriented decision-making style.  This kind of leadership style may lead to more effective leadership but, unfortunately, people-oriented leaders may be seen as less competent by others.  Here at The Myers-Briggs Company, we wanted to see if differences in personality was related to the “glass ceiling” problem. 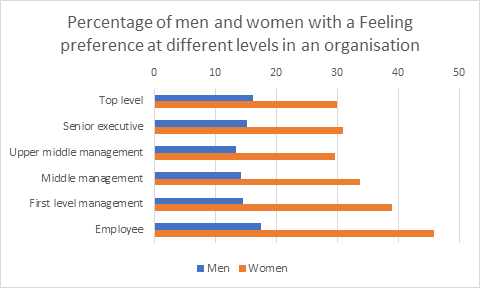 So, 70% of women use the Thinking preference at the top leadership level- a preference that is usually more common in men.  Although there is evidence that the Feeling approach can make for a very effective leadership style, organisations may see this approach as less valuable, and this might contribute to fewer women being promoted to higher levels.  For organisations, this pattern means they are less likely to benefit from values-based decision-making styles at the top levels.

What can we do about this? Those of us working with organisations have a role to play in helping our clients to see why the values-based approach to decision-making can be useful and valid. Instruments like the MBTI assessment, which promote diversity and an understanding of others, can be effective here.

The Myers-Briggs Company presented this research at the European Association of Work and Organizational Psychology conference 2019.