How long will it be before Smartphones replace computers for employee assessment? 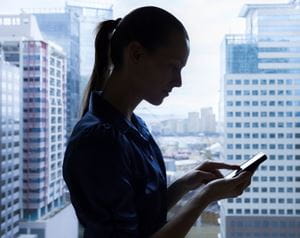 1.5 billion people in the world own a smartphone. That’s almost 20% of the world’s population; and in the US and Europe, 60% of the population own one. Such a ubiquitous device has become part of our daily lives. Many of us have it on hand at all times to check the weather forecast, get directions, access our text and email messages, and read the latest news. Indeed, the average user spends three hours per day on a smartphone and 15% of all global internet traffic originates from smartphones.

What has all this got to do with psychometric assessment? Well, there are two reasons for thinking that the smartphone will replace the desktop and laptop – and probably the tablet – as the platform for delivering tests, exercises and feedback reports. One reason is that in many emerging countries, the smartphone is greatly preferred to those older devices. The other is that the recruitment industry, so closely allied to the assessment industry, is already adapting its techniques to the popularity of the smartphone. In the US, over 40% of candidates carry out their job searches on a smartphone, so big employers and some recruiters have made their recruitment sites mobile friendly. At least one of the big US restaurant chains hires entry level staff almost exclusively through smartphone campaigns, and prospective employees make their application through their own smartphone.

It makes sense for an industry like that to focus on the smartphone. Candidates are making judgments on what they think a company is like to work for. Organisations whose processes and modes of recruitment fit the candidates’ lifestyle are more likely to get the best ones, and the company’s branding gets a boost from being modern and easy to deal with.

Job seekers have responded by preparing mobile-friendly CVs that rely heavily on graphics and videos rather than words to sell themselves. These videos show them performing skilled tasks or answering common interview questions. Recently, one US advertising agency recruited interns by inviting them to apply by using Snapchat on their smartphone to ‘snap’ a series of answers to interview questions and other measures. These initiatives are popular, especially among tech-savvy younger people and minorities who are skilled with their smartphone and quite conversant with its capabilities. In a recent survey, when given a choice of job application methods, a good proportion of women said they preferred a smartphone.

So, are any big organisations already taking the plunge and offering cognitive and personality tests for smartphone applicants? Indeed they are, one example being a multinational restaurant chain that uses an adaptive personality test for the first stage of recruitment for entry level and first line management jobs. It offers applicants for these positions the choice of coming to a nearby restaurant to take the test on-screen, completing it at home or at work on a desktop or laptop, or accessing it on a mobile device. Three years ago, 91% of applicants preferred the desktop option, but that has fallen to 66% while at the same time the popularity of the smartphone for taking the test has risen from 9% to 31%.

It’s not just personality tests that are being delivered by smartphone. Some organisations are delivering cognitive tests that way too. A growing amount of data suggests that using a smartphone, even for cognitive testing, does not penalise candidates; scores on smartphone and desktop/laptop are equivalent, although this is not true of timed tests. It can currently take up to 30% longer to complete a test on a smartphone because of connectivity issues, distractions in the vicinity of the candidate, and the small screen size.

It remains to be seen how quickly the psychometric test industry will adapt to changes in the way prospective candidates want to engage at the recruitment stage. Even if the will is there, it is not just a matter of shrinking current assessments to fit a small screen. There are many graphic design and human interface issues to be considered. However, these changes may be forced on the test industry by their clients, because only by staying ahead and in tune with candidates’ lifestyles can those clients expect to attract the best talent.