Last week, I had the pleasure of joining an MBTI Step II qualification workshop for the first time in several years. This revamped workshop incorporates several new ideas to help practitioners to engage their clients in MBTI in general, and the Step II instrument in particular. 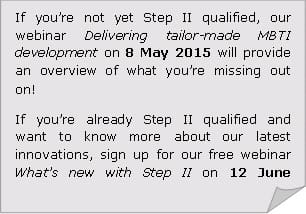 As ever, we had a fabulous group of workshop participants, each having come along with their own goals, aspirations and ideas for how Step II might support their work. One had a project with a client who had specifically requested Step II, while others were seeking a way to address the regular challenge we all receive about the MBTI (Step I) framework being too broad a brush to capture someone’s uniqueness and individuality. Within the workshop, we saw how Step II is an impactful way to help some individuals clarify their best-fit type, as well as exploring how it can open up a conversation to explore the difference between those aspects of someone’s behaviour that are driven by their innate underlying preferences, those that are habitual adaptations to environmental expectations, and those that we need to flex into from time to time. We also talked about the power of Step II to re-engage people who have ‘already done MBTI’, and get them thinking about a deeper Development Journey within this same powerful framework.

It was brilliant to see how quickly the group took to the new Personal Typies and Team Typies, all of which are driven by MBTI Step II results. We had hoped to engineer an impromptu case study by asking the group to suggest what preparation they would need to do if running a development session for a team with the Team Identity Typie pictured below. But they were onto us straight away, immediately recognising themselves as the ‘team’ in question! 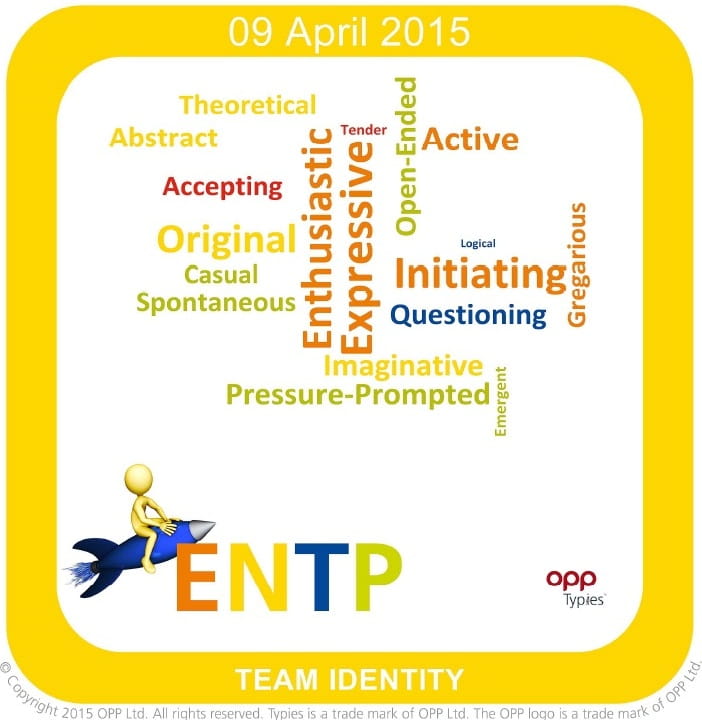 As you can see, the group had a ‘team type’ of ENTP. In itself this is useful to know and provides helpful information for anyone familiar with the 4-letter MBTI Type code. What the Team Identity additionally reflects is that this group operates with a particular ‘flavour’ of ENTP characteristics. The biggest words in the Typie reflect the highest scores within their collective Step II profiles. So we could expect to see behaviours associated with Initiating, Expressive, Original and Enthusiastic coming to the fore. Even without knowing any detail about the Step II facets, just from the Typie you can quickly develop an impression of this team’s dynamic. A very friendly bunch, comfortable initiating relationships. Lots of expressive talking! Quite a lot of brainstorming! Lots of new and original ideas! Loads of enthusiasm! The OOPSs (‘out-of-preference scores’) around the Feeling dimension also stand out, such that although the majority of the group claimed a preference for Thinking, behaviourally we saw quite a balance of T (Questioning and Logical in blue) and F (Accepting and Tender in red).

The group were also quite taken with the Team Flipside Typie concept. Theirs is shown below – highlighting all the Step II facets that the team might be tempted to forget or neglect. We think the Team Flipsides might be a useful aide-memoire to help teams (particularly those who are very type-alike) make sure they pay attention to their collective blind spots.

By looking at this team’s Flipside Typie, you’ll be unsurprised to learn that the more concrete and practical aspects of using Step II only arose in the last couple of hours of the workshop.

As well as producing the Team Typies, this online application automatically produces Facet and Application Charts that plot all individual Step II profiles. This workshop was my first opportunity to try out these features for real to support the design of experiential exercises. We also had a real time demonstration of one member of the group redefining her Best Fit Type as a result of her Step II explorations – which then enabled us to go back into the software to quickly make this update and regenerate the different outputs. The same can be done if someone joins or leaves a team – profiles and be easily deleted or added to the saved team data.

What’s been enormously rewarding for me, having been involved in the development of the Typies, is to see how they are taking on a life and energy of their own, and in ways that I hadn’t necessarily anticipated. And my experience last week has generated yet more ideas about what other resources we could develop. Thanks team!

Let us know if you too have a new idea – and watch this space!