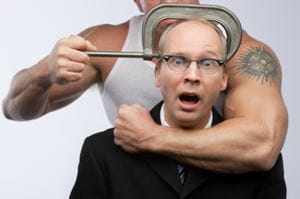 How comfortable would you feel about your personality being reduced down to just one score from 1 to 10? The top end of the scale would describe a more desirable personality, the bottom end... well, sorry... undesirable. Perhaps you could wear your number on a badge. Surely this would save a lot of time at cocktail parties and speed-dating events?

Some psychologists seem to think that reducing your personality to one number is a reasonable idea. Their new theory has been receiving increased attention in academic circles.

So I decided to look into this theory and to present my findings on the conference circuit. (It’s a bit like the stand-up comedy circuit, but with more wrinkles and fewer laughs.)

If you have an interest in psychology and personality, you may well be aware that a predominant view of personality is that you can describe it broadly in terms of five big factors. Raymond Cattell, who created the 16PF personality questionnaire was the first to notice these five factors, although he was adamant that there were other ways to summarise personality, hence a questionnaire measuring 16 factors of personality. The commonly agreed ‘Big Five’ factors are:


Authors such as Musek (2007) and van der Linden, Nijenhuis & Bakker (2010) have recently suggested that you can reduce these five factors down even further to describe personality. The result is the Single Factor of Personality (SFP). People high on this factor are said to be altruistic, relaxed, sociable, intellectually open, satisfied with life, emotionally intelligent, and are likely to have high levels of well-being and high self-esteem.

That’s all very positive – if you’re lucky enough to be on the high end. But can we be sure that all of these things really cluster together? There are a number of suggestions for why researchers may have found evidence for a single factor in their personality data:

In addition to the above thoughts, I had one really important question: is it any use?

On the first question, I couldn’t find a single factor that fitted the theory – instead I found two. On the second question, I found that detailed matching of specific personality traits to job criteria (from all of the 16PF’s factors) could be up to twice as effective in predicting job satisfaction and performance than either the two big factors or the five factors. So the two factors I found were not particularly useful.

This made perfect sense to me, as requirements of a job are specific, so the personality traits most suited to a job will be specific too. Additionally, as the 16PF questions consist of choices between equally attractive responses (eg would you prefer to be a counsellor or an architect?), the questionnaire may avoid the measurement quirks that create a so-called single factor.

So my conclusion is that when it comes to high-stakes assessments such as recruitment, where getting it right is crucial, it’s far better to define clear links between the job role and the personality traits, and to be as detailed as possible. This will increase your chances of identifying the candidates with the greatest potential.

If you are curious about the analysis, data and figures, it’s all summarised here in the slides I presented to the British Psychological Society’s Division of Occupational Psychology Conference earlier this month.