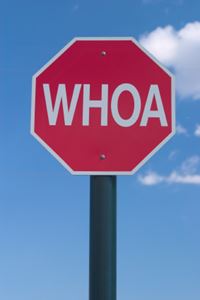 It seems as if every time we look at a news bulletin at the moment, there is another twist on the horsemeat scandal. First horse was in supermarket ready meals, then in school dinners, and now pork, chicken and other substances seem to be getting in on the act. It is hardly surprising that we hear that people are turning to vegetarianism. Here at OPP, this made us reflect on what we know about ‘career vegetarians’ – the personality and characteristics of people who identified themselves as vegetarians before horsemeat hit the headlines.

We’ve actually carried out two national studies where we asked people about their dietary habits. Back in 1995, we asked a representative cross-section of the British public to complete the MBTI questionnaire and other tools. We found then that 7% of the population identified themselves as vegetarian or vegan. In 2011, we carried out a similar study with the 16PF questionnaire; again 7% identified themselves as vegetarian or vegan. In 1995, we also asked people what their reason for becoming a vegetarian was; the most common reason was concern for animal welfare (63% of vegetarians), with only 37% quoting dietary concerns. It is interesting to speculate what these percentages would be if we asked the same questions tomorrow – and if they would have changed back again the day after.

What can we say about vegetarians as a group? Compared with other people, they are:

What of personality? For the MBTI questionnaire, we found that those with a preference for iNtuition, and especially those with a preference for iNtuition and Feeling, were more likely to have chosen vegetarianism. We know something about the buying behaviour of these four types (INFJ, INFP, ENFP and ENFJ). They are often ethical or green consumers, making decisions based on their values and wanting to make a positive difference to the world; this fits well with the choice of vegetarianism, and with animal welfare being the top reason for this lifestyle choice. Those least likely to have chosen vegetarianism, people with a preference for Sensing and Thinking, will typically buy on the basis of value for money, with a list of pros and cons; it may be that the horsemeat scandal has tipped that balance a little more towards the vegetarian side.

For the 16PF questionnaire, we found that vegetarians were on average:

This is a very different personality from the stereotype of the strident, campaigning vegetarian, and begs the question as to whether vegetarians will take any advantage from the current situation. Already there are almost as many vegetarian jokes as horsemeat jokes doing the rounds (did you hear the latest scandal? Traces of tofu have been found in tahini sauce).

I personally am a carnivore – well, an omnivore – although people with preferences for my MBTI type (INTP) were also quite likely to be vegetarian (three times more likely than you would expect by chance). I do however live with a vegetarian INFP, so I eat a lot of vegetables. But what about you? Has the horsemeat scandal changed your eating habits, and how does your own personality fit with this? It might be something worth thinking about...