The OPPrentice: Survival of the fittest? 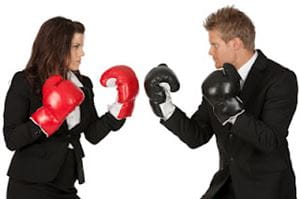 In this week’s task, both teams had to develop an innovative fitness class and sell it to leading health clubs. The Sterling team, led by part-time wrestler Ricky, came up with the idea of fusing martial arts with street dance, but what they ended up with was an aerobics class with amateur, Karate-Kid-style punches. Phoenix, led by Stephen, developed an 80s-themed dance class with some pretty crass moves (more akin to a cheesy soirée in a nightclub than an exercise class).

Despite an utterly cringe-worthy promotional fitness video, coupled with a completely flawed pricing strategy, Stephen’s team won the task. We can safely say that this was largely down to luck rather than competence.

Duane, who until this week was one of the favourites, was unduly fired. In previous tasks, he demonstrated innovative thinking, leadership skills and effective team work. He is likeable, genuine and bears an uncanny resemblance to Tim Campbell – who won the first Apprentice series. How did this front runner fall flat on the ground?

The reason could be to do with a concept called Icarus Syndrome. Icarus Syndrome afflicts people who get carried away by their own success. They begin to believe that, like Icarus, they are invincible. Duane performed well in previous tasks and impressed Lord Sugar. Consequently, he became over-confident in his abilities, and when in charge of developing the promotional video, he failed to listen or take on board ideas and feedback from his team members. Both Laura and Nick warned Duane that the video did not have the right balance between martial art and dance (this lack of balance was essentially the failure of the task), but he would not listen. Following a childish squabble between Duane and Laura, who were acting like kids in the back of their parents’ car, itching to arrive at the destination just so they could break away from each other, Duane egocentrically refused to kiss and make up. Instead, both he and Laura adopted an uncompromisingly competitive conflict style, and refused to be placated by Nick’s attempts at smoothing things over. Later, Laura simply avoided the conflict when Duane continued to compete. We can’t help thinking these people could do with taking a look at our TKI conflict-handling model…

As with Icarus, Duane’s metaphorical waxy wings melted as he flew too close to the sun when he failed to acknowledge that he had done any wrong, or to take on board criticism. This lack of humility led to his downfall.

Self-proclaimed “witness the fitness” Ricky, on other the hand, came out quite well this week. As Project Manager, he motivated his team and provided direction. His passion for the task and strong presentation skills helped to win some orders. Nonetheless, Ricky’s poor judgment in bringing Laura and Duane into the boardroom meant that others got away with making minimal effort.

Stephen’s team got extremely lucky with a large order from one customer. It was astonishing how they managed this with Azhar, who was rather reminiscent of Mr Muscle in his eye-poppingly tiny shorts, at the forefront of the promotional video. Azhar’s bizarre rictus smile and grimacing, shouty monologue have really been his only contributions over the last few weeks. He has slipped into the background and is another example of social loafing (as seen previously); he could be next in the firing line.

Overall, Duane was arguably the strongest candidate. However, his sacking demonstrates that in order to survive the tasks and become Alan Sugar’s business partner, candidates need to cooperate with each other, take responsibility for their failings and effectively manage the conflict that inevitably arises from the competitive environment of the show. Some have worked out this strategy; others, like Duane, get carried away by their own successes and are blinkered to their own blind spots – and will probably not endure the demanding selection process.

It’s as if the Beeb actively sets out to showcase self-promoting arrogance, and then bamboozle the blusterers with their lack of self-awareness, all for our voyeuristic entertainment…