Introversion 2.0: Why we need to reshape the way we work | World Introvert Day

January 2 is World Introvert Day—a chance to celebrate those people who make up more than half the global population. Across the world, 57% of people have a preference for Introversion.

As many businesses and employees transition back to the workplace after forced remote working, it’s obvious that things won’t be the same as they were before.

But before we look at what the return to the workplace means for people who prefer Introversion, here’s what we know about the broader transition back to work:

Now, let’s focus on people with a preference for Introversion. But first, let’s recap what it means.

“The words Extraversion and Introversion get a lot of play on social media and, in many cases, these words are defined incorrectly or misunderstood,” says Michael Segovia, Master MBTI® Practitioner and Senior Consultant with The Myers-Briggs Company.

“On the Myers-Briggs Type Indicator®, Extraversion and Introversion are defined in terms of how we like or prefer to direct and receive energy. They’re not necessarily about sociability or even social confidence. We’re not talking about how shy you are. In fact, I know people who prefer Introversion who are not the least bit shy.”

A preference for the outer world or the inner world shows where a person likes to spend more time and where they get energized. It’s part of what makes that person who they are.

And this brings us onto authenticity and personality.

If people can’t be their true selves at work—if they’re unable to be authentic―then they’ll be less likely to flourish or perform well.

And the traditional workplace set-up is often a barrier to people’s ability to be authentic.

Dr Rachel Cubas-Wilkinson, Principal Consultant at The Myers-Briggs Company and co-creator of Inclusive Leadership: Harnessing Diversity of Thought, demonstrated this with a personal anecdote. It’s about the first job she got as a consultant.

“I have a preference for Introversion and the first month I started my job, the entire floor was demolished. All the walls came down and everyone was assigned a cubicle, a chair and three lockable file drawers. And the leader was so excited. He stood on the middle of the floor and said, ‘This is going to drive collaboration, this is going to drive people working together.’

“The reality was quite different. What ended up happening was that people started bringing headphones to work and finding ways to build privacy.

“I was starting out as a consultant and I was assigned the cubicle across from the break room,” Rachel explains. “And one day, rather than being productive, I sat and counted the number of times I was interrupted and I lifted my head to look up when someone entered the break room. Then I had a conversation with my supervisor and said, ‘You know what? As someone who has a preference for Introversion, I really like quiet work environments. If you want the best from me, you’re going to need to let me work from home if this is the workplace reality.’

“I told [my supervisor] that in a single day, I had become distracted to look up and see what was clearly in front of me 532 times.”

The frequency might be extreme, but this kind of distraction won’t be uncommon.

“It’s an example,” she adds, “of a leader having predispositions or bias. If they love being able to go around and talk to people, they might think everyone else thrives that way too. This is why creating inclusive workplaces for different personality types can be difficult. Inadvertently, those susceptibilities exclude others.”

Distraction isn’t an issue for just some employees. Everyone gets disrupted by distraction. The point is that normalized office behaviors are distractions for people who prefer Introversion, who respond differently to chemical releases from the brain than those who prefer Extraversion. It’s how their brains are wired. Knowing this helps us understand everyone’s needs better.

People with Introversion preferences need solo recharge time. It’s not a luxury or a ‘nice to have’. It’s what helps them function properly, be in balance, and be their authentic selves.

First, those with Introversion preferences can get their recharge time more readily. There isn’t a workplace ‘office culture’ to deal with.

Second, there may be less need to recharge anyway because there are fewer distractions to begin with.

In The COVID-19 Crisis: Personality and Perception (2020), The Myers-Briggs Company found some significant differences in perceptions of COVID-19 between different type preferences. It’s useful information for any return-to-work plan.

Here are the key findings:

As remote workers, those preferring Extraversion did in general agree that they enjoyed working from home. But those with Introversion preferences agreed significantly more emphatically with all these statements. It’s possible that Extraversion types had adapted less successfully to remote work.

Given all the above data and factors, how do we shape the workplace of the future?

People preferring Introversion have more challenges in open-plan offices than those preferring Extraversion. The data supports this.

The data also tells us that remote working is generally better for them, too. Which means, in performance and well-being terms, the office—as it was—isn’t the most fruitful place for those who prefer Introversion to work.

Turn that around. Use our tips for managers and employees to reshape the workplace model. 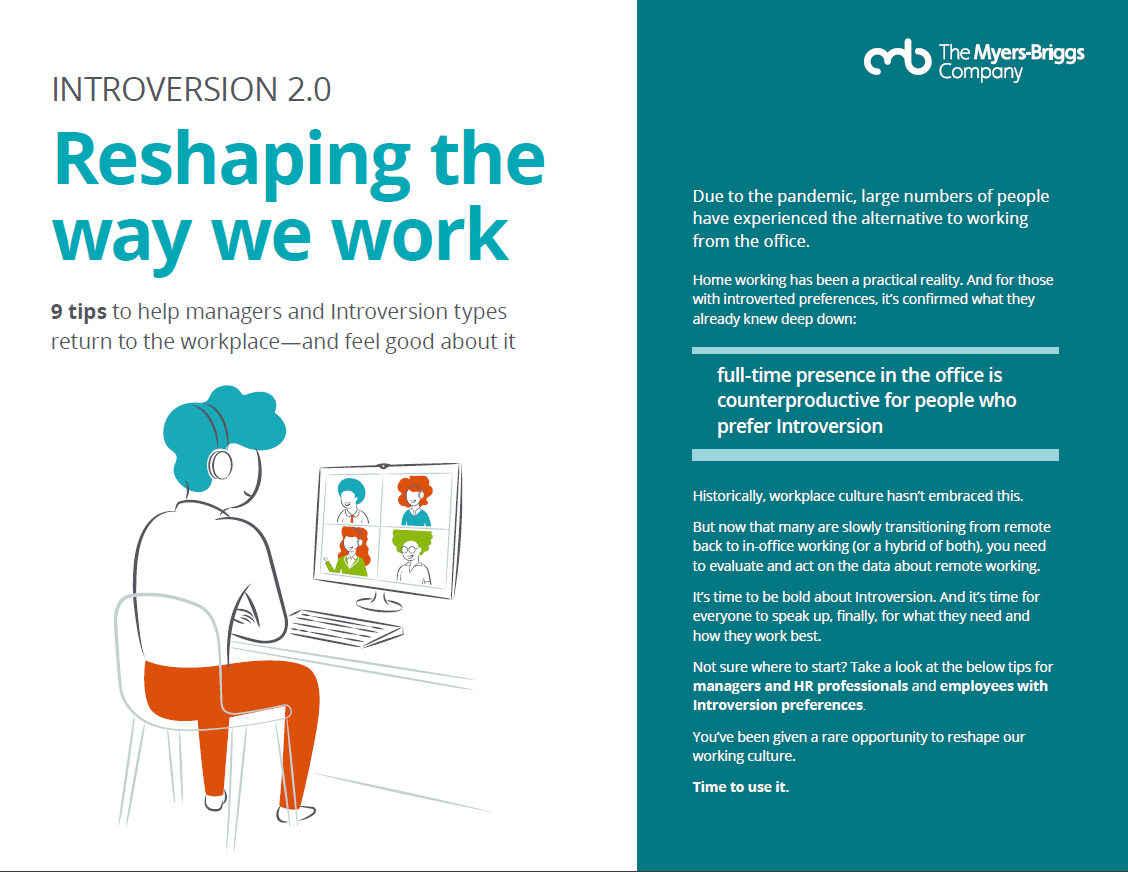 And what do you do now?

If you haven’t seen Professor Nicholas Bloom’s Tedx Stanford talk from 2017, take a look. He talks about a working-from-home experiment conducted with travel agency CTrip in China. CTrip commissioned some people to work from home while others stayed in the office. This is what they found:

The experiment was so successful that CTrip rolled it out to whole company, giving people the choice as to where they worked—home or office. And those who were distracted by being at home came back to the office, suggesting a ‘self-regulation’ effect. Those who were more productive at home continued to work there.

Whether it was mostly Introversion-preferring types who chose to work from home isn’t covered. But, given our own research, you might expect this to be the case.

The crucial point is to give people the choice and keep it open. Let people try. Trust workers to gravitate to where they feel and work best.

Why not use the data and our tips to try different things post-pandemic? People who prefer Introversion need to be heard, no matter how quiet they might be.

It’s time to reshape the workplace. Reset the way we work. Say hello to Introversion 2.0.

Want to learn more about Introversion?

Check out Unleash the power of Introversion in your team webinar.

What are the different personality types of those preferring Introversion? Download the World Introvert Day infographic to learn more.