I’m embarrassed by a tweet I sent yesterday. I quoted a BBC article that I’m now doubtful about. It wasn’t the tweet about Clarkson; I’m still fully behind the BBC’s decisive action in the face of an odious form of workplace bullying. No, the tweet was about research into regional differences of personality in Great Britain. 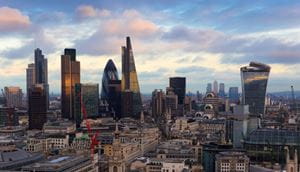 The article was thought-provoking. It discussed how a major personality study had shown ‘quite striking patterns’ across the regions – for example, in their colour-coded maps of Great Britain (it’s not the UK, as they didn’t have enough data for Northern Ireland), Scotland is bright red when the map represents the trait of Agreeableness. In other words, the research states that Scots are relatively much higher in how supportive, cooperative and, well… how nice they are. Other similar claims are made about unfriendly Londoners, depressed Welsh people, and so forth. The researchers were careful not to put a cause to their correlations – they couldn’t say if the locations were creating the personality differences in those who live there, or the locations were attracting people with particular personalities.

I found this fascinating. At OPP we had done some similar research with the 16PF assessment, but our findings were much more modest. For example, we found Londoners to be less rule-following, and Midlands residents to be more private; although there were statistically significant differences, few were of a size to be meaningful.

So I turned to the original research paper of this more recent study to learn more. As I read on, things weren’t really adding up. I couldn’t find the absolute figures for personality in different regions – I realised that the reported findings were only comparative, eg Scots more friendly than Londoners. Then, finally, in some tables which were not even included in the main body of the research paper, I found the actual results. It turns out that the differences are tiny.

Here’s the science bit, where I’ll use Extraversion as an example (warning, there will be numbers): the personality traits are measured on a 1–5 rating scale. The mean result for the nation on Extraversion was 3.24. The least extraverted region was 3.05 (-0.19 from the mean) and the most extraverted appears to be 3.40 (+0.16 from the mean). With a large group of people (nearly 400,000 in this case), these tiny differences will prove to be significantly different, statistically speaking. But how much do results on this questionnaire vary anyway? The standard deviation (how much the results generally vary) was 0.82 for Extraversion – noticeably larger than the reported differences. It’s reasonable, then, to say that the differences observed between the regions are not of any great practical difference.

In less statistical language, what the researchers have found is that the differences between the regions of Great Britain are much, much smaller than the variation within them. You will be lucky if you only ever meet the large numbers of warm, welcoming Scots and never meet one of the many grumpy, standoffish ones. The same goes for Londoners.

Our own research finds the same pattern even across different nations – small personality differences are significant, but not very meaningful. We found Americans and Europeans to be broadly similar in personality. What differ much more are the personality profiles of different occupational groups (anywhere in the world).

The researcher’s figures point to this too. They show larger levels of extraversion in managerial and professional workers (their correlation of 0.62 is impressive). Whilst caution must be made about causation, it’s not unreasonable to hypothesise that higher numbers of professional and managerial jobs in London will uplift the region’s Extraversion levels by a tiny amount. The same could happen for both Extraversion and Openness, as a result of foreign immigrants to the capital, and creative industries based there too. It’s not surprising to see in the data that people who have had the courage to come here from abroad to find work are more open-minded, conscientious and extraverted than the national average.

In summary, the BBC haven’t let the scant differences get in the way of a ‘good’ but potentially misleading story. However, the truth holds a much more encouraging and interesting story of its own. If you’re looking to find an open-minded individual, don’t simply head to London and pick a stranger – seek out a professional immigrant working in the creative industries.