Trust: it’s what success is all about 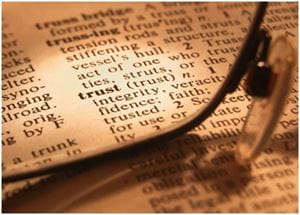 We all know from personal experience that we trust some people and not others. Likewise we trust some organisations, and yet find we are sceptical of the motives of others. This tendency to categorise entities in this way is part of an understandable strategy to manage risk.

To understand the impact of levels of trust, think about a working colleague you don’t trust. How quickly do things get done? How easy is it to work with them? Now think about someone you do trust – ask yourself the same questions. The difference between the two shows how much effort it takes to manage the risk associated with this lack of trust. The reverse is also true: where there is trust there is speed, agility, warmth and success.

I recently watched Sir Bob Geldof deliver a conference keynote on the theme of trust. Reflecting on one of the most celebrated musical events of all time, he talked of the huge burden of trust he felt in the aftermath of the Live Aid concert in 1985.

The concert, and the linked Band Aid recording project, was built on the relationships and trust between the bands, promoters, organisers and technical support involved. And of the people they were doing it all for – the people contributing financially to the charity, and the recipients of the aid in Africa. With just one shot at the concert, it simply had to work – and that’s a lot of pressure!

Geldof went on to underline how, in his work and businesses, he sees being authentic as a key building block of a trust culture. We may live in a world of general distrust, but by sidelining irony and cynicism, by caring for your clients and your employees, you can build trust. Be real, he said, and “treat your customers like your life depends on it” – because it does!

Live Aid is an obvious example of a general truism: that great teams, professional relationships, good leadership, engaged employees, loyal customers and successful outcomes are all built on trust. Sharing openly, with honesty and integrity, builds trust, and enables/encourages people to discuss challenges in an open, direct and positive way.

“He who does not trust enough will not be trusted” said sixth-century BC philosopher Lao Tzu. Stephen Covey, in his book The Speed of Trust, qualified this by saying that what is needed is “smart trust”, measured and incremental until sufficient history exists for full trust. The alternative, “blind trust”, he says, is a very risky strategy to employ.

According to Covey, the key driver of trust between people is the confidence one person feels in the character and competence of the other. Here “character” means the person’s morals, values and what we think matters to them; competence is what we see of their ability to behave in the ways required in order deliver what’s needed.

Openness is a prerequisite of trust. It establishes common ground, breeds respect and leads to increased and lasting engagement. This was one of the key findings in the employee engagement stats from the 2014 Edelman Trust Barometer, the largest ever global exploration of trust in a corporate setting, with more than 33,000 respondents in 27 countries. The survey revealed that treating employees well and engaging with them was a critical breeder of trust according to executives and employees alike.

Trust, then, is not just a social nicety – it’s an economic driver. But while it often doesn’t occur automatically, it is a learnable competency, something that should be focused on and actively developed. Tools such as the MBTI® are enormously helpful here. MBTI insights promote greater understanding between individuals, establishing a common language that paves the way for trust. Working with the MBTI instrument in an organisation helps build a culture in which openness and trust can take root and breed success.

With the upward spiral of trust set in motion, there is an increased confidence and efficiency within an organisation. It cuts out ‘beating about the bush’ and speeds things up – leading to effective meetings, concise conversations, and fast, confident decision-making. It enables people and teams to operate well, even when the team members are not all in the room at the same time. It also enables people to push the boundaries – if you have gained my trust, then I trust you are pushing back for good reasons rather than just being awkward! And where there is trust, I will believe that if you say you are going to deliver, you will deliver (just ask Bob Geldof).