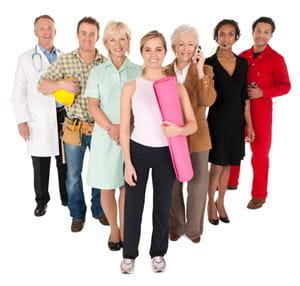 We’re all getting older. That’s always been true; what’s different now is that most of the people around us at work are a little bit older too. Life expectancy is rising, and we don’t have to retire at a set age any more; the proportion of the workforce aged over 50 has gone up by 5% in the last decade and is still increasing. If you’re a recent graduate, you can look forward (or not) to working into your seventies.

With as many as four different generations working alongside each other, it is more important than ever to find out how aging affects people and their professional life. So we set out to find some answers (which we presented at the BPS DOP Conference this January).

We asked a cross-section of the British and Irish population about key elements of work, and compared their answers across different age groups. The results showed that the older we are, the more likely we are to be comfortable with and to value:


As expected, older people were typically less comfortable with high-risk/high-gain roles – jobs that are relatively insecure, but that offer the possibility of high rewards. This finding echoes organisational theories of aging, which argue that younger adults focus more on the pursuit of future-oriented goals, whereas older adults are more concerned with the here and now.

We were also able to look at the personality traits of each person, as measured by the 16PF personality questionnaire. We found that older people tended to be more emotionally stable and relaxed, were more willing to follow externally imposed rules and regulations, and were more likely to want to work and make decisions alone, rather than as part of a group. They were typically less impulsive, less self-critical, and more focused on detail and on the present moment, rather than on the big picture and on the future. These age-related trends are similar to those found in other studies. For example, a study of a large sample of the British population in 2001 found that older people were more conscientious, less focused on social interaction and less concerned with the future-oriented motivation of career goals. The research included not only OPP’s tools such as the CPI questionnaire, but also a number of competitor instruments.

Finally, our study found evidence to suggest that some personality traits help to explain the relationship between aging and people’s perceptions of work. As individuals get older, certain elements of their personality tend to change; this in turn influences the way they view their environment and how they prefer to work. Our results suggest that the fact that older people are typically less comfortable in high-risk/high-gain jobs, as mentioned, is partly because they are less impulsive and spontaneous. You can read our detailed findings here.

Of course, one disadvantage of this study is that it is cross-sectional; we weren’t able to carry out a longitudinal study, where the same individuals are studied over a period of many years to see how they change as they age. However, previously published longitudinal studies have shown similar findings, and OPP’s own research shows that the personality of the population as a whole has not changed greatly over the last two decades. As an individual gets older, certain elements of their personality are likely to change with time, in ways that are common for most people; sometimes this is seen as ‘mellowing with age’. However, there are always younger people coming into the population, and older people leaving it, so the population’s personality structure as a whole remains stable.

So what are the practical implications? Clearly, these differences in what individuals value may contribute to ageism in the workplace. And it’s not only older workers who are affected; one recent study showed that young high achievers – average age 30, good academic records, international experience – only stay in organisations for an average of 28 months. Poor training and development opportunities, and not enough coaching and mentoring, were all contributing factors. As individuals grow, what they want and need from the workplace will change; aspects of their personality may change too, but they won’t become entirely different people. A knowledge of both the general age trends and of an individual’s personality is crucial in helping to build engagement and motivation, and can form the basis of coaching, mentoring, training and development initiatives in every organisation. And this in turn can lead to decreased turnover and increased productivity for all age groups in the years to come.