Could Andy Murray be a great leader? 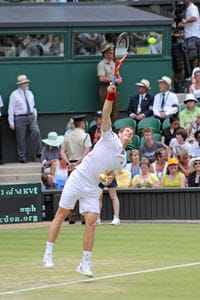 He has it all. Application, vision, guts, ambition, determination, a record of success and with it, a developing charisma. These are the very things we seek in our leaders. Should we make Andy Murray Prime Minister or Chairman of a Trust focused on getting unemployed youth into work?

The notion is tempting, but actually we have no idea if these are the characteristics that actually make successful leaders. Fictionalised views of historical figures have encouraged us to think that successful figures have many of these qualities. When describing modern leaders we usually present them in the form of portraits of great leadership figures. We have a collective fascination with leadership that glorifies it, placing great emphasis on heroism and charisma, despite the lack of any systematic evidence to support the idea that charismatic heroes make good leaders.

Why do we thus persist in seeing leaders and leadership as the causal force behind the activities and outcomes of organisations? Why do we give leaders such credit for influencing and changing our institutions and societies? Despite centuries of study and decades of formal research, the concept of a leader remains largely elusive. Yet we continue to promote the idea that if only there was more heroism amongst our leaders, many of our societal and organisational problems would be solved. It has been easier to believe in leaders than to prove they exist.

We do recognise that politicians, CEOs and team coaches who were hitherto successful can suddenly struggle and have to be replaced. We also know that people transplanted from a situation in which they were successful often fail in the new situation. But this is not enough to shake our faith in the value of a leader.

The reasons are both emotional and cognitive. When thinking about cause, we like to simplify. The most graphic examples are when we seek a scapegoat in the aftermath of a disaster. Pilot error, a careless mistake by a single individual – even acts of God are all cases where we indulge our desire to find a single, simple cause. We are sceptical about official enquiries that conclude that no-one was to blame. This desire for simplification also applies to the acts of leaders. If there is a success, we like to attribute it to the efforts of a single individual rather than to collective efforts or sheer luck, and we ignore the effects of external factors and the surrounding environment in which organisations operate.

We also have an emotional need to believe in the concept of a leader, along with some fairly fixed ideas about what leadership should look like. These biases (and they are akin to prejudice) about what leaders should be like and what they are responsible for all play crucial but underexamined roles in the leadership process. They put dysfunctional pressure on leaders to be better than it is possible to be. Just listen to what Andy Murray has had to say today about the pressures of public expectation over the past five years.

The truth is, we are all followers – not in the sense of wishing to be passive, compliant, obedient ‘sheep’ at the mercy of our leaders, but rather the opposite. We want to be active, powerful players in the leadership process. As followers, our biases are contagious and quickly spread to other followers. We influence them, even when we have had no exposure to a particular leader. We can decide whether someone is an effective or ‘good’ leader, worthy of financial reward or to remain in political power.

Should we therefore teach good followership, just as we aim to teach good leadership? I think we should. The first lesson would be that “leader” is the temporary label we give to a person who collects around him or her a team of people who perform a variety of leadership functions. Leadership functions are the actions needed to organise and direct people, to set a process in motion and to explain and motivate. On rare occasions, they can be carried out by a single person, but most often they are achieved by a group who share out the leadership functions, and even overlap when executing these functions. This creates a process that might be called distributed leadership.

The second lesson would be that every event has multiple causes, and that the blend of leadership functions needed to deal with a single organisation’s challenges changes regularly. Therefore, it is only the leadership group, and not a single, semi-permanent leader, that has the breadth to cope. The third lesson would be that everyone in an organisation can take part in distributed leadership if they know their strengths and are encouraged to develop them. This is what OPP means by “unlocking potential”.

It is optimistic to believe that distributed leadership will happen all by itself within an organisation in a trickle-down manner. It is a process that needs to be installed. It is not achieved by teaching people all the qualities that we imagine leaders should have. People need help to use their particular talents to take on proscribed leadership roles within a distributed leadership system, and that’s where self-awareness and concerted development effort come in. Psychology holds one of the keys to uncovering people’s strengths, as well as diagnosing areas of organisational need.

The qualities Andy Murray has and to which we all aspire may only be helpful in certain leadership situations. Some theorists have warned against romanticising the notion of leadership, and that is what we risk doing if we only aspire to a set of predefined, ‘heroic’ leadership characteristics of the type Murray has demonstrated in the last few days.