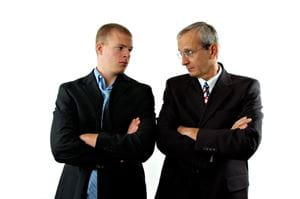 According to OPP research, 85% of people experience workplace conflict. The Apprentice, hotbed of engineered interpersonal strife, gives us multiple examples of how people deal with conflict differently. Based on categories defined by Thomas and Kilmann, let’s examine the candidates’ preferred ways of dealing with conflict in this week’s task.

This week, the candidates’ job was to raise awareness of underrated English sparkling wine by designing a website and creating an ad campaign.

Jade and Adam were paired up once again to direct an advertising campaign for Team Phoenix. Jade, frustrated with Adam’s self-promoting approach to “choreographing” the task, took a compromising stance, letting him posture embarrassingly about how to hold a wine glass but ultimately retaining control over the quality of the output. By creating a win-win situation, she was able to satisfy Adam’s need for influence, whilst she retained the final say on what video would look like.

Jack Russell Stephen dealt with conflict in a competitive manner. Whilst researching sparkling wines on the market with Gabrielle, they differed on what they were looking for. Stephen asserted his views strongly and challenged Gabrielle. In the boardroom, his competitive mode was heightened as he defended himself by blaming Ricky and Gabrielle for the failure of the task and challenging Lord Sugar to let him take on the role of PM in the next task.

Ricky, team leader of Sterling, flexed well between collaborative and competitive modes. He listened carefully to others’ ideas, and when required was decisive. He was clear on brand idea; he took control and gave clear directions. His natural style for dealing with conflict appears to be competitive, but he manifested this in a positive way. He will need to be careful and not overuse his competitive mode in future, as this could lead to unhelpful behaviours, such as imposing decisions on others.

In contrast, cultural guru Tom, team leader of Phoenix, avoided disagreements. When he was shown the final cut of his team’s ad campaign, he shied away from expressing what he honestly thought of the content, then later confided in Nick that he found the video generic and boring. Typically people who deal with a potential disagreement by avoidance do so because they recognise it is not worth the effort, and Tom was proved right by the fact that his team won the task and did not descend into a chaos of interpersonal conflict. However, overuse of this mode could mean that issues are left unaddressed, and may impact on communication, something Tom may want to keep an eye on – especially if he chooses to pickle himself with English ‘sparkle’ whilst his teammates slave away in front of a hot screen.

In previous tasks, Jenna’s conflict mode was to accommodate, showing a high level of co-operation, and low assertiveness. Based on past performance, she has overused this mode, leading others to undervalue her contribution, and limiting her sphere of influence. When she put herself forward to lead this task, no one voted for her. However, this week she switched to a competing mode, ignoring Ricky’s instruction to make the ad sophisticated and taking the risk to make it ‘humorous’. Her attempts get the wine waiter to ham it up as ‘Basil Forty’ were more humorous than her efforts to inject humour into the ad, which ended up being utterly cringe-worthy and out of synch with the “lugshurry” brand Ricky was trying to promote. This was only compounded by whingy Stephen’s idea of naming the brand “Grandeur”, a disastrous attempt at archetypal Englishness. You can almost hear George Bush in the background declaring, “Of course, the French don’t have a word for…”.

Surprisingly, Tom’s team won despite failing to meet the key objective of the task: to raise awareness of English sparkling wine. A key theme with Tom seems to be that when he knows a subject well, he looks for opportunities to show off his knowledge, feeding his ego at the expense of the project brief. Whilst he was educating bouncing protégé Adam on fine wine and having a jolly, he took his eye off the ball.

I wonder whether it was Lord Sugar’s ploy to make Team Sterling lose the task so as to oust Jenna? He couldn’t see himself doing business with her. In a previous task, he alluded to having reservations against Jade, so possibly she may fizzle out if she’s in the losing team next week.

As the number of candidates is gradually whittled, their ability to deal with conflict effectively will be increasingly challenged. As Thomas and Kilmann state, defaulting mindlessly to your natural conflict mode will not work in all conflict situations. Different modes are appropriate for different instances, depending on how much is at stake and how important it is for you preserve relationships. As the stakes are raised and the dwindling relationships strained, can the remaining candidates flex their style and show themselves to be truly credible professionals? Or will they remain hackneyed, made-for-TV stock characters? As usual, we think that self-awareness might just be key…