Show me your money 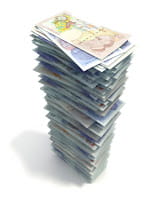 The programme ‘Show Me Your Money’ aired recently on Channel 4 has raised a great deal of controversy in the press. When Charlie Mullins, CEO of Pimlico Plumbers, decided to break one of the ultimate taboos by asking his employees to reveal their wages to each other, tensions rose to an all-time high as workers discovered massive discrepancies in their pay levels.

The experiment was inspired by a much wider project from the 1950s. Wilfred Brown, having inherited the Glacier Metal Company from his father-in-law at a young age, questioned the fact that as CEO he should necessarily earn much more than his workers, despite having less education than many of them. Elliott Jaques, an occupational psychologist, was interested in exploring what made some levels of pay seem right and fair, while others were considered unjust. The two men collaborated to create the ‘Felt-Fair’ pay system – as the name suggests, a system in which all employees perceived company salaries to be fair. In order to achieve this, they revealed all employees’ salaries and formed a team of elected representatives from all levels of the company to allocate pay levels. At a time when many companies struggled to stay alive, Wilfred Brown’s company continued to thrive.

Charlie Mullins was led to try the experiment in a bid to reduce the number of people coming to his office asking for ‘a few more quid’. People tend to assume that an increase in their income will lead to increased satisfaction; however, research attempting to establish this has mixed results. For instance, it has been found that income will have a greater effect on happiness if money itself is not the final aim; and that people are more likely to be satisfied if their income is higher than other people’s. One theory of satisfaction, known as adaptation level theory, states that our perception, for instance of our income, is relative to the background context. This means that a recent pay rise will lead to increased satisfaction; as the rise grows further and further away, however, the satisfaction wears off.

Interestingly, if workers are dissatisfied with their salaries, it may not imply that they aren’t satisfied with their jobs. Herzberg’s two-factor theory of job satisfaction suggests that one set of factors determines whether an employee is satisfied, while another set determines whether they are dissatisfied. The first set of factors are known as ‘motivation factors’; this group includes such things as respect from colleagues and managers, challenging work, and opportunities for growth. Salary, along with such things as working conditions and job benefits, is a ‘hygiene factor’. A good salary cannot in itself produce satisfaction with a job, but it can prevent workers from becoming dissatisfied.

All this to say that if Charlie Mullins thinks that under the old system people are unlikely ever to be satisfied, and that they will continue to ask him for more money, he’s probably right. Under the new system, employees have a much clearer view of where their money is coming from and whether they really are being paid a fair wage. And thanks to the changes that have since been implemented, workers at Pimlico Plumbers genuinely are receiving a much fairer deal. However, the transition was a painful and risky process that lost Pimlico Plumbers a few workers, and could result in some long-lasting negative effects, particularly on relationships. It remains to be seen whether these will be outweighed by the positives...