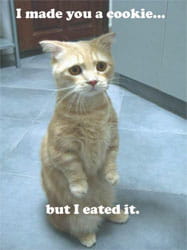 Never work with them: they're uncontrollable, unpredictable and they make a huge mess. And that's just the team leaders.

But we were wagging our tails with glee when we saw Lord Sugar’s bulldog jowls announce that Vincent was to lead team Venture. This is what we had been waiting for since the series began – such an ego, so little substance or self-awareness. How would leadership suit him?

We never expected things to turn out like they did, though.

It isn’t the first time that Lord Sugar has fired two people in a single sitting, but never so early on. Either he was properly annoyed, or the producers needed to weed out the runts so the stronger members of the litter could survive.

On Logic, Glenn was given the lead. Glenn’s admonition to his team I “want everyone to put everything into this” and “I want us to win this task” were stating the bleedin’ obvious, but worse, they were not backed up by any substance. It’s a competition, and it’s a dog-eat-dog one at that. Really, the only way to get respect in these circumstances is to earn it (and even then the team members may turn on their handler).

“When you're a manager you deserve respect from your colleagues”, Glenn barked, but mutual respect was something that was woefully lacking when he denied the findings of the focus group and the opinions of the rest of his team, in order to pursue something that was basically a half-clever pun that he himself had thought up on a whim. Cats' eyes; cat size. Geddit? See their light; see they’re light. Pardon us while we regurgitate the small plastic toy we ate earlier.

How irritating for us, then, to see that his product was genuinely acceptable on an as-is immediate basis to real-life pet food manufacturers, and had accidentally stumbled on a niche without even looking for it. But that’s the way the cookie crumbles.

What a contrast with Vincent’s Venture output, which cocked its leg against the idea of how special pets are to their owners, and in fact turned the product’s proposition into the complete opposite of a USP. “The EasyJet of pet foods”, he said. Yet even the EasyJet brand packs a better odour of quality than the EveryDog cans, which looked like they fell off the back of a lorry that wasn’t good enough to get through the gates of a low-cost German supermarket.

Neither team leader showed much Emotional Intelligence. Vincent failed to realise his own weaknesses and failed to put personal prejudices behind him (of which more later). And chasing his own tail, Glenn failed to display consideration or respect for any opinions or perceptions other than his own. He seemed genuinely surprised when confronted by his team about the need for mutual respect.

We were impressed with Natasha’s success with the TV ad. Perhaps she got lucky with the ‘talent’, for who can resist a bouncing Jack Russell? But her energy and enthusiasm were clear and infectious, and her release from the boardroom back to the kennels was deserved.

Whereas the CatSize ad was amongst the most forgettable we’ve seen, and the looming human at the end was simply freaky. Freaky in a different way was the decision Glenn made to appoint Leon to give the presentation. Leon did not want to do it, and his faltering, beaten cur performance was lacklustre to say the least, contrasting poorly with the confident way Melody purred through the EasyDog - sorry, EveryDog - pitch. Though we do question her statement that the team is "bold" - of what possible use is that to a pet food buyer? And 'bold' is not the term that springs to mind as a primary adjective to describe a brand of generic pet slop aimed also at cats and fish...

A good leader should of course challenge team members to develop their skills – but with pressures and timelines as they were, Vincent really should have played to the strengths of his team. Unless of course Glenn was being strategic: was Leon being set up as a fall guy, to be dragged by the collar into the boardroom if Logic had failed?

Ellie continued to sleep curled up by the fire, her opinion, like Tom’s, repeatedly ignored. Lord Sugar determined that Ellie was not someone he could work with, and who are we to disagree? We are, however, thinking that there is a balance here that makes this phenomenon not wholly the faults of Ellie and Tom: even though they often point out valuable truths, both are guilty of shutting up when ignored once (a fatal mistake). But if the team leader continues to ignore them, then they have little chance of ever being heard.

Which brings us to the admiration Vincent held for Jim, which was palpable, and his deference verging on embarrassing. Vincent was team leader in name only: Jim was the alpha male, and Vincent demonstrated himself to be his lapdog.

We’re surprised to see Lord Sugar turning on Magic Jim. Sure, he may have contributed an idea or two that didn’t work out, but a) successful brainstorming is as much about filtering and quality control via a facilitator as it is about the ideas that are brought to the table – and when that facilitator is hanging on your every word, the dumb idea you threw out being promoted is hardly your fault, and b) to our mind, he has really been the only contender who has demonstrated such a rounded set of abilities – let alone his skills of negotiation and persuasion.

Or is he the sly fox that we once suggested? Certainly a few cracks have begun to show through the glib Stormont-politician-at-a-press-conference exterior. He's certainly house-trained in managing his own emotions, remaining calm and cheerful in the face of intense pressure, or the threat of the boardroom. He is also very good at reading the emotions of others and the mood of the team, and using this to his advantage: he picked up on Vincent's drooling admiration and deference, and used this to his advantage - clearly too strong a contestant for Vincent to risk sitting beside at the boardroom table.

We strongly suspect Lord Sugar will sound the horns and let slip the pack on Jim next week, by appointing him leader of one of the teams. The question is, does Lord Sugar really have it in for him, or is he merely throwing a challenging bone to someone that he thinks could actually be best of breed?