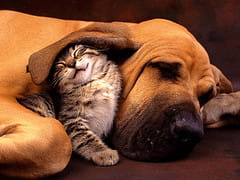 To what extent is our choice of pet, or indeed whether or not we choose to have a pet, governed by our personality?

Within our sample of 1,212 respondents, which was representative of the UK and Ireland general population, 59% reported owning a pet, with:

Across all pet categories, women were the more likely gender to own the pet (with the exception of birds; 66% of bird owners were men). Now, we recognise that often the choice of pet ownership is not entirely our own, with the under 19s being the most likely group to own rodents and rabbits – along with their parents (the 35-49 year olds). However, is there some truth in the perceived wisdom that dog owners and cat owners are different from one another?

When we looked at the types of work that would appeal to dog and cat owners we found some significant differences:

This appears to conform to stereotype, so maybe there is something in it… These work preferences were supported by the differences in personality traits that we found:

So maybe pet owners do resemble their pets? However, despite the temptation, it’s probably best not to start asking interview questions such as “Do you own a dog?”.