How festive are you feeling? 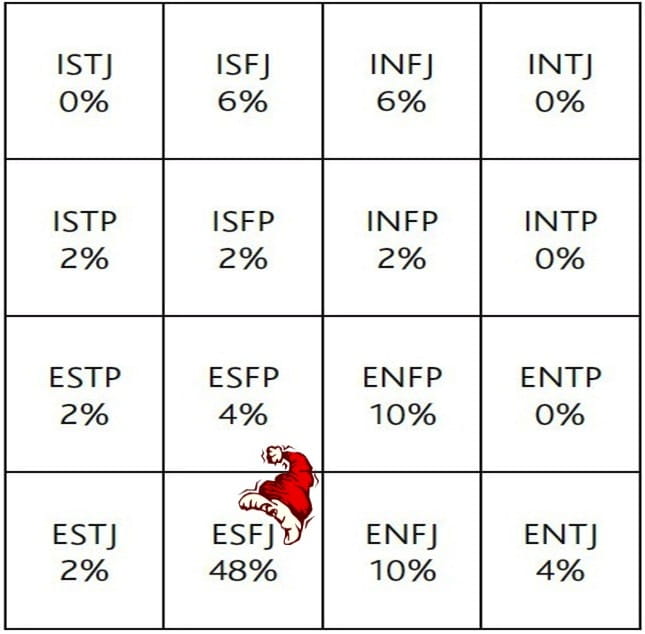 In December, our lives are dominated by Christmas. That, at least, is what TV, internet and high street window displays would have us believe. In the interests of glimpsing the truth behind the tinsel glitz and Christmas muzak, OPP carried out a survey a few years ago to see how people approached the various elements of the festive season.

Our research panel shared with us their MBTI type, as well as their 16PF profile, enabling us to make some interesting insights. We also asked them to hazard a guess at that most tantalising of Christmas conundrums: Santa’s MBTI type! The ‘Research Panel’ was small – just 56 – but the results would seem to offer a fair snapshot of the love it/leave it festive dichotomy.

When do you decide what you’re doing at Christmas?

What do you like to do on Christmas Day?

There were some relationships between personality and these activities:

So how much do we actually enjoy Christmas?

Respondents were asked to state, on a scale from 1 to 10, how much they were expecting to enjoy Christmas. The average score was 7.42, with 82% of respondents choosing 6 out of 10 or better. In other words, most of us do seem to enjoy the festivities. Those who believe they will enjoy Christmas:

Our survey suggests that although there is no one personality type, or combination of personality traits, that enjoys Christmas more, a number of factors play their part in the love it/leave it dilemma.

As for that million-dollar-question about Santa’s MBTI type… almost half the respondents suggested he is an ESFJ. The type table at the top of this blog shows how people cast their votes. People of type ESFJ tend to have an outgoing nature and an understanding what others need, and work best in an environment that fosters a family-like atmosphere: essential attributes for the man with several million kids on his Christmas list!