Neuroscience of personality: your brain and type 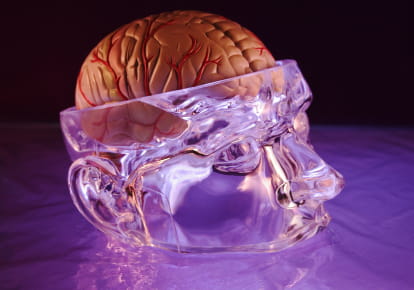 What’s going on in your brain? These days, we can peer inside and watch at every millisecond as brain regions get active, send signals, coordinate, dampen each other, and otherwise sustain 'you'. A couple of hours with an EEG machine produces 45 million data points. What can that data say about your psyche? Does that data jive with type? The answers, while not tidy, continue to amaze, challenge, and inspire.

On a fine October Saturday in 2006, I sat down with some university students to explore the brain. An EEG machine reports electrical activity from the neocortex, that thick outermost layer that is home to much conscious human experience. It is one thing to read about the brain and speculate about links to personality. It is another to see the machine light up, responding in real-time with a telling variety of bars and colours. When the first student that day donned a snug red nylon EEG cap and spoke his first words, auditory regions of his brain lit up. When he made a decision, his left executive region got active, and so forth. We were so excited: the brain is for real! I could hardly sleep for weeks, plotting lab activities and wondering about implications. Now, seven years later, the tool of neuroscience continues to act like type: a fount of practical insights that keeps on giving.

A first thing about the brain: it is 'organised'. Broadly speaking, your brain consists of many small modules. Each module is a neural circuit that helps you do a task. Some tasks are concrete, such as recognising faces, hearing voice tone, and moving a hand. Other tasks are abstract, such as evaluating ethics, adjusting to others’ feedback, and mentally rehearsing a future action. There are easily five dozen modules just in the neocortex. Moreover, there are broad qualities like empathy and imagination - the stuff of the psyche. These are supported by various modules working in concert, like instruments in a symphony.

The 16 Myers-Briggs types speak to something real. Each type is like a different song played by our symphonic brain. After working in depth with almost 70 subjects, trying various tasks for two or three hours with each, I can say with confidence that people who identify with the same type code tend to rely on similar brain regions. For example, INFPs favour regions that aid listening, speaking, identity, and imagination. In contrast, INTPs favour regions that aid various forms of reasoning, from straight deduction to categorising and weighing of risks versus uncertainties. Moreover, on the EEG monitor, INFPs may sport a solid blue map when listening actively one-on-one, while INTPs may sport a solid green map as they shut out signals from the brain’s deeper regions to get objective in a 'disassociated' state. And so on, across the types. Truly, brain activity varies by type, and the clearest patterns match the original impulse for type theory: Jung’s framework of eight mental functions.

Of course, each person is unique. Each brain that enters the lab leaves having told its own story. When I line up seven INFPs’ brain maps, four maps are similar (85%+ in common) while two are moderately similar (50%-85%), and one is an oddball. Regardless of match, and in light of their background and interests, it’s clear that each brain meets the psychological needs of that person’s type, often in a similar way, but occasionally by a road less travelled. This is a valuable clue to understand what happens with mature adults.

Last year, I started looking at midlifers (age 35+). At first, I was dismayed. Three male 40-something INFJ musicians looked as much like ISTPs as INFJs. And yet we felt sure of best-fit type. How could this be?

We can use an EEG to gauge more than the brain’s electrical activity levels. We can infer circuits. From once every second to once hourly, two or more regions may fire together. For example, when two key auditory regions fire in synch, a person is keenly attending to both verbal content and voice tone rather than just one or the other. Every person shows circuits. These circuits take time to burn in and probably reflect the long-term consequences of culture, career, relationships and such, as well as type preferences. Among young adults, brain activity levels and circuits generally match. They use what they’ve learned. They focus on who they are. Midlifers, however, show the reverse. A 40-year-old INFJ musician may be wired like an INFJ, but he engages less-wired regions favoured by ISTPs. 'Doing INFJ' is as easy as signing his name, and he now engages who he is not. Didn't Jung name this phenomenon? It’s called individuation: even as we deepen and rely on the strength of our preferences, we explore new aspects of ourselves, often represented through our opposites.

I hope you’ve enjoyed this tour. The key lessons: first, the brain is like a toolbox, and we use tools that help us meet our psychological type needs. Knowing each type’s favourite brain regions and holistic states helps us coach, lead, and teach better. What is extraverted Sensing anyway? It’s more than the five senses! The typical brain activity of SP types provides concrete leads that deepen our understanding and appreciation. All that said, background and development are also in play, and as we master some tools, we move on to others in a life-long growth process.

Neuroscience plus type, like hardware with software, comprise a powerful duo. You likely know your type code. In the not-too-distant future, you may know your brain scan too. Together, they remind us that we are amazing, and that every insight or answer is food for more questions and exploration. How are you individuating?

Want to hear more? There’s a webcast on this subject, "Brain savvy basics: the brain science behind personality" on 18 September 2013!

Dario Nardi, PhD, is a research fellow at UCLA and winner of two teaching awards, for innovative use of technology in the classroom and as Distinguished Teacher of the year. He is also the owner of Radiance House, a books and media publishing company. Dario has been an MBTI(R) certified type user since 1994 and is author and co-author of numerous type-related books including "Neuroscience of Personality" and "8 Keys to Self-Leadership". His background includes Japanese, games, creative writing, and aerospace engineering. For more information on Dario’s book, “Neuroscience of Personality”, follow these links: http://www.em-poweruk.com/ourshop/prod_1807508-Neuroscience-of-Personality-by-Dario-Nardi-PhD.html or http://www.radiancehouse.com/psych.htm.