Is graphology a valid recruitment method?

If you happened to be listening this morning to BBC Radio 4’s award-winning news and analysis programme Today, you may have heard claims that handwriting analysis can help you make better recruitment decisions.
During the programme, a graphologist was featured who made some impressive claims for the effectiveness of this method. Proponents of graphology suggest that the distinctive shapes of our handwriting give us very specific insights into our personalities, and therefore our potential fit with particular jobs.

This rings a few alarm bells with psychologists working in the psychometrics industry. We too claim to be able to make accurate predictions about future job performance using the tools and skills available to us… but are we really using similar methods? And can graphology really make plausible links between handwriting and fit with a particular role?

Thankfully, as this interview is available on iPlayer (you can hear it in the last five minutes of the show), it gave me an opportunity to really evaluate the claims and listen in detail to the graphology reading. I should explain that not only am I a registered Occupational Psychologist specialising in recruitment, but I have also studied the methods used by psychic performers in some detail. Here’s my view of what was really going on during the graphologist’s slot on this morning’s show.

Psychological research has been effective in finding horoscope statements that most people tend to agree with. Named after the researcher, these are known as Forer statements. “You can be quite stubborn and certainly know your own mind, and you are actually much more independent than you come across.” In my view, this cleverly contains a statement about his externally visible character, as well as his inner feelings, which she speculates are inconsistent with each other. If she’s wrong with one, she can be right with the other, or claim that that is how he feels, but not how other people see him. In this way, she covers all her bases and doesn’t commit to a clear statement about his character.

“You are quite, sort of, critical of yourself and other people.” It’s known that a lot of people would agree with a statement such as this about themselves. As mentioned above, a psychologist called Bertram Forer showed this very effectively with research in the 1940s. His original version was: “You have a tendency to be critical of yourself.” I recommend you follow the link and compare the rest of her statements with the Forer passage.

Additionally, she seems to have picked Forer statements particularly likely to appeal to a BBC Business Journalist.

There were other methods and motivations at play too:

1. Flattery
Try an experiment yourself. Reverse some of the statements she made. Do they still ring true? Would he have still said “Bang on”?
Try this: “You have a feeble brain.”
He might well have disagreed with this one. Her actual statement was complimentary, arguably no more than appealing flattery. People like flattery.

2. Making the method seem plausible
The graphologist talked of what it was in the handwriting that enabled her to draw such conclusions. In my opinion, the conclusions could have been drawn without any reference to handwriting, through the use of cleverly chosen Forer statements; the handwriting is merely a prop used to give the ‘reading’ some credibility to the layperson. It also serves to distract the person being ‘read’ from the techniques being used. In this respect, it acts in much the same way as other readings, such as a crystal ball, palm-reading or tarot cards.

3. Including some truths
I would also observe that widely accepted truths are mixed into the interview to make other things seem more plausible (eg that personality is probably stable after early childhood).

4. Playing on people’s pride
The presenters and producers of the show have booked her; they don’t want to look silly (even if that’s already been achieved by the feature).  The same will apply to a manager hiring her to do this in their office, and therefore the ‘findings’ can be self-fulfilling.

What if I’m wrong in my analysis of the graphologist’s demonstration? I could be.

If I thought I might be wrong about this particular person’s methods, I would then research further and seek to reassure myself by turning to the empirical research. Many studies have looked into the effectiveness of multiple different recruitment methods. In particular, the work of Smith and Robertson (2001) compiled many, many studies into one ‘über-study’ (a meta-analysis). They found the relationship between graphology and job performance to be random, or zero, as shown in the graph below. In other words, there is no relationship between the results of handwriting analysis and job performance. Remember, this is not just Smith and Robertson’s study – it is a compilation of many studies. 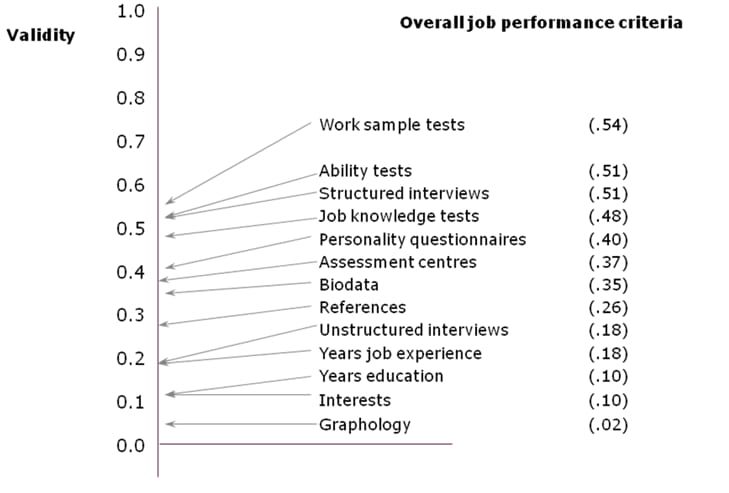 I’ll give you a clue about other methods that might prove more effective than graphology: according to Smith and Robertson, psychometrics come out significantly better. So occupational psychologists, consultants, and anyone using or commissioning psychometric tests for selection in their organisation can feel confident that, unlike graphology, they have a proven, scientific link to job performance.

Key for the graph:
A validity index of 1 would show a perfect fit between the criteria and what it is predicting; 0 shows no relationship; 0.4 and above is very respectable.