The battle of leadership 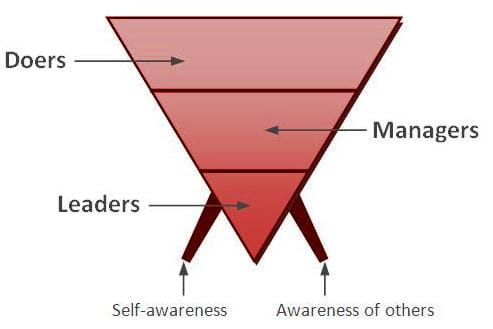 Guest blogger Kaveh Mir of Deep Values Coaching assesses the impact of conflict on organisations when senior leaders are at war.

We all have either been part of or witness to battles at work. Workplace conflict, no matter how small, tends to divide individuals into distinct factions, much like nations or alliances in a war – especially when these factions are allied under one leader. Many of the differences that arise in the workplace can be seen as ‘turf wars’: that is, employees will come into conflict over responsibility, recognition, credit or blame. One party perceives that another party is infringing on their turf; the first party fires verbal shots, and war is engaged. Those outside the front lines choose sides, opting to stand behind one party or the other.

This type of outright conflict has a particular colouring and ambiance when the people at war are senior leaders. Because of their position, conflict at a leadership level has more resounding consequences than conflict at other levels. This can be illustrated using a conventional ‘triangle of hierarchy’: at the bottom of the triangle we have the doers, in the middle the managers and at the top the leaders. Under normal circumstances, the structure is stable and solid: 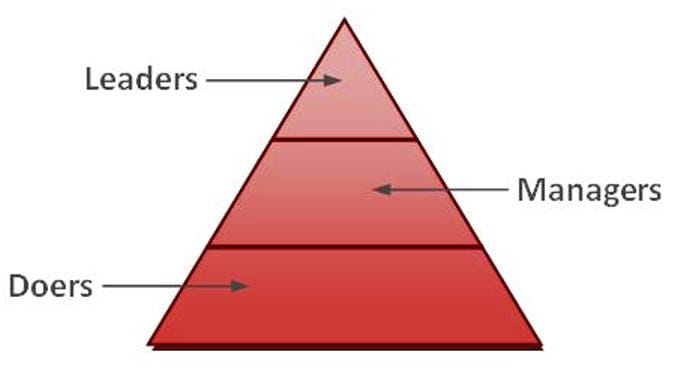 However, when an organisation’s leadership is in a crisis of conflict, it is as if the triangle has been turned upside down. The leaders become an unstable base on which the attention of the rest of the organisation is focused. The ‘doers’ become a top-heavy force, distracted from their jobs by the crisis at the senior level. If the battling and conflict continue for too long, the whole triangle is in danger of toppling: 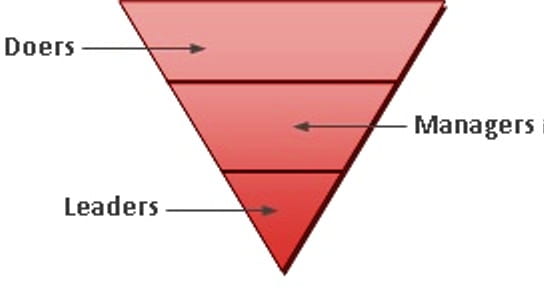 Battles (ie unproductive conflict) are forces that potentially shake and destabilise organisations. When the battles occur within leadership positions, these shakes and repercussions are experienced throughout the organisation, with the leadership level exerting a great cultural influence over the processes, relationships and productivity at every level.

So what can we do to minimise the impact of these destructive tremors, which risk toppling an organisation when there is a battle going on within its leadership?

First we have to identify the type of battles that are occurring:

Of these three types of battle, the ‘WHO’ battle is the most difficult to deal with, as it involves relationships, emotions and subjectivity as well as processes and facts. It involves PERSONALITY.

Two key things can help leaders to be able to cope with, reduce, control and potentially eliminate the scope and scale of battles: self-awareness and awareness of others.

This is illustrated in the diagram at the beginning of this blog: self-awareness and awareness of others will act as support pillars, assisting leaders in propping up their organisation, and preventing damaging ‘topple’.

When a leader is aware of their own values, preferences, traits, needs and beliefs, they have a solid foundation for seeing, hearing and feeling the differences in others. This understanding of personality gives the leader more tools for dealing with different scenarios and people. The awareness they gain of themselves and others will assist the leader in moving from merely accepting diversity, to respecting diversity, and finally to actively valuing diversity – reaping the important benefits that diversity to brings in stabilising an organisation and making it thrive. Self-awareness also engenders behavioural flexibility, mitigating the risk of further conflict in future.

One method that I use for increasing awareness is to familiarise leaders with the vocabulary of personality preferences, traits, needs and values. This provides a safe, non-confrontational communication tool for leaders to discuss their differences. Amongst the many tools available, the MBTI, FIRO and 16PF tools are some of the most well known, and are proven to be trustworthy and effective. By completing a psychometric questionnaire and using the results in a series of feedbacks and coaching sessions, leaders start to feel comfortable expressing their own preferences, and are equipped with the ‘eyes and ears’ to spot those of other people. I have seen leaders use a growing awareness of personality vocabularies to help them deal directly with the ‘WHO’ battles in a much more productive way – allowing their organisations to survive and thrive, rather than teetering on the edge of disaster.

Kaveh Mir is founder of Deep Values Coaching. He is a serial entrepreneur with more than 20 years of CEO and senior executive experience and an MBA from Cranfield School of Management, and recently published his book Wars At Work. During the past three years through almost 20 engagements, Mir has advised and assisted several organisations on a variety of topics including executive coaching, leadership development, organisational development and change, organisation design and team development. He is a Fellow Member of the Institute of Directors, a certified ICF coach, a BPS Test User: Occupational, Ability and Personality certified assessor, and an NLP Master Practitioner.