The OPPrentice: Leading the way through a heap of junk 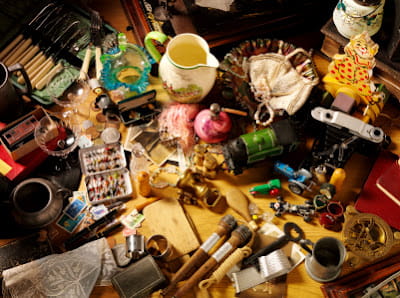 In this week’s episode, both teams were tasked with sourcing second-hand interior wares and selling them on for a profit. Retro trendies with floppy hair and impossibly skinny jeans, found mooching around gentrified Brick Lane in lens-less specs, were the target audience, as everyone bandied phrases like “shabby chic” and “upcycling” around willy nilly. Team Phoenix, led by Tom, focused on buying a few quality items and keeping costs down; team Sterling, led by Laura, bought a larger quantity of less expensive items and attempted to renovate them to make a profit. In the end, Stirling sold more items but lost the task; and Jane’s disastrous sales technique, lack of previous contribution and Lord Sugar’s general gut instinct were the reasons for her eventual firing.

It was a challenging task for the apprentices, as none seemingly had any previous experience of spotting items that had profit-making potential. The job of Laura and Tom, as leaders, was to organise their respective teams to make profit possible, in spite of this lack of knowledge.

Leaders often have to operate in situations where they are not experts in an area. In such circumstances, having a clear strategy is important, as it was in this week’s task. Both had a coherent strategy, but what was interesting was the way each team leader engaged with their team members to execute their strategy.

Tom took the time to think about the kind of customers attracted to Brick Lane and the style of product they might appreciate, which demonstrated solid business awareness, and focused his attention on buying fewer items that were appropriate to the customer base. However, he failed to gain the confidence of team members that his thrifty strategy was the correct. Research shows that the mark of a good leader is not just to have a clear strategy, but also to convince followers to ‘buy into’ it. The impact of team members not getting on board with an overall strategy is not necessarily that a task will fail – but it can lead to people taking actions that become detrimental to the overall goal. Though not detrimental to the task, Adam’s desperation to find more items to sell by frantically rummaging through the bins may have been detrimental to his street cred, if not his overall human dignity.

Tom was unaware that members were unconvinced by his strategy, and genuinely believed his team was happy with the direction. Leadership research suggests that self-awareness or emotional intelligence is a core attribute. Successful leaders use self-awareness to recognise when their team members are unhappy, and are then able to use different approaches to engage with them. Although Tom’s team won the task, whether he can stick it out as a great strategic leader remains to be seen.

In contrast, Laura’s leadership style was to involve the team in deciding on the strategy. This resulted in them willingly accepting it, and she was then able to utilise the strengths within her team by putting people in charge of tasks that played to their strengths. Engaging with team members helps to raise morale and empowers them to achieve the overall goal.

However, engaging team members and making them feel good are not enough to be a good leader. Leaders need to demonstrate ‘situational’ leadership: the ability to adapt your leadership style as the situation demands. When it came to budgeting, Laura needed to be less collaborative and more directive, rather than blindly assuming that Gabrielle would have the common sense to keep costs low. Gabrielle may see herself as someone with creative flair (although those cack-handed Union Jack monstrosities may belie the fact that in taste terms, she is all mouth and no trousers) – but she lacked commercial awareness.

Situational leadership demands that a leader demonstrates appropriate behaviour, even when they come under fire. But the Boardroom scene is where the selfish gene is activated, and this week’s episode was no exception. Phoenix, the losing team, went from co-operative behaviour, as seen in the task itself and the back-slapping at the start of the Boardroom session, to preserving self-interest by blaming each other for the failure of the task. The three women in the firing line were like cats fighting over a mouse. Laura, self proclaimed ‘Rottweiler’ (albeit one caked in an impenetrable layer of makeup), sunk her teeth into Gabrielle for overspending on the materials just seconds after she had gushingly praised her supposed creative flair. Her panicky attempts at self-preservation reached their comedic climax when she accused Gabrielle of shouting, just as she herself got louder and more aggressive – a textbook case of projection of which Freud himself would have been proud.

Laura’s childlike behaviour in the Boardroom tarnished her overall performance on the task, and damaged the good relationships she had worked hard to build. As the leader, she ultimately controlled the purse strings and should have been accountable – and Lord Sugar acknowledged this when he condemned her attempts to shift the blame. It seems that although the programme’s format nurtures competition, no-one wants to work with someone who’ll smile at you one minute, but then stab you in the back before you can say “Union Jacks are sooo in this season”.