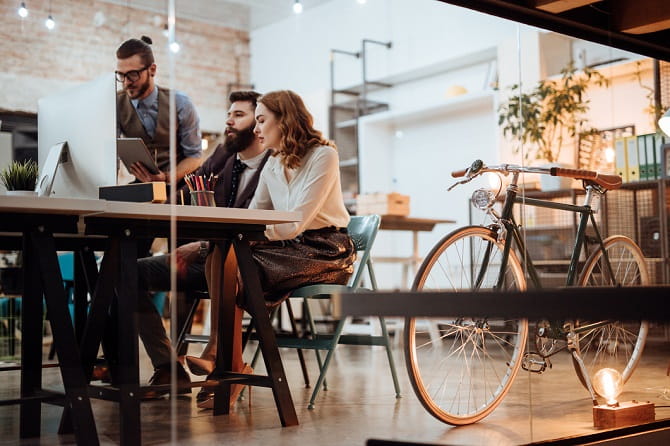 The Dutch office of Deliveroo is characterized as young, fast-growing and dynamic. It’s an organization where many ambitious young professionals work. On average, the employees are 27–28 years old and the composition of the teams often changes.

“In our on-the-go culture, we noticed that we needed to do something about development within the teams,” said Merel Soree, HR Business Partner at Deliveroo. “We wanted more awareness around the question of, ‘Who do I now work with all day? What’s going on in their lives? How can we work better together?

Kirsten Hexspoor, owner of Hexspoor Training & Coaching and Associate Trainer/Consultant at The Myers-Briggs Company, developed an MBTI-based personal and team development program for employees at the head office in Amsterdam.

The program aimed to give people more self-awareness and to help them better understand colleagues so that collaboration is optimized in rapidly changing teams.

The participants first worked on themselves. With MBTI Step I, participants gained insight into their preferences, personal style and development needs. They discovered which of the 16 MBTI types they recognized in themselves the most, and they got the chance to share this with their team.

Then they examined team type and team interactions. For this, Hexspoor used the MBTI Step II questionnaire to deliver a more in-depth MBTI workshop.

“People who had doubts about their MBTI type found Step II particularly enlightening,” says Hexspoor. “The extra facets gave them more insight into what they recognized in themselves earlier. In this workshop we looked in more detail at the individual dynamics within personality types: How does my MBTI type express itself to me? What is ‘natural’ and what has been learned or influenced by environmental factors?”

For the team, we again looked at the team distribution on the facets and how people can build a bridge to each other. During the Step II team session, Hexspoor worked at Deliveroo with buddy pairs. She let the participants coach each other, based on their personal MBTI Step II report

This worked very well, giving participants insights into each other and the opportunity to help each other in personal development: “Is that your blind spot? But that is my strength! I’m going to help you with that.”

Finally, Hexspoor linked the Step II results to a topic that is currently ‘live’ for each team – for example, communication, conflict management, change management or decision making.

The MBTI sessions have been very positively received by the staff at Deliveroo.

“The biggest conclusion is that people suddenly understand what people are like and how they really are, and that was definitely not always the case before,” said Pleuni de Zeeuw, Head of Rider Experience at Deliveroo. “There were very clear opinions on the lines of ‘I don’t like this’ or ‘this doesn’t work’. There is now much more understanding for colleagues who see things differently.”

The Sensing–Intuition exercise was an eye-opener and caused a change of mind within de Zeeuw’s team. People are now much more aware that they can adjust behavior to work better together. It’s a layer of self-awareness that they really felt with the MBTI tool.

“For example, one team member has adjusted the way he pitches an idea,” said de Zeeuw. “Previously, he didn’t really get to know his creative, conceptual thinking colleagues, because he got bogged down in the specific details. Now he stands up and pitches his ideas in a very enthusiastic way. You can see that it worked. His colleagues were much more interested than usual and started asking him questions. That was super cool to see.”

One of the other results is that people are changing and adapting their work environment. For example, quiet spots have recently been created. “We actually outgrew our building on Keizersgracht,” says Soree. “Many people with an Extraversion preference working in small spaces has an impact on people with an Introversion preference.”

Soree and de Zeeuw have the ambition to make the MBTI framework a common language within Deliveroo.

“I think it would be cool if we applied it even more in the business,” said Soree. “For example, I see a lot of added value when people of different types go on customer calls with each other so that they can complement each other.”

The MBTI framework is already very much alive in de Zeeuw’s team. The type table hangs on the door with all the names in it. Each month, during a joint meeting, a team member discusses a work situation based on his/her MBTI preferences and then addresses questions such as: “What could someone do to help you? What should they not do?”

“As a result, at Deliveroo’s people are much more aware of their strengths and pitfalls,” de Zeeuw adds, “and team collaboration has become much better. MBTI is a real success for our organization.”

The biggest conclusion is that people suddenly understand how people are and what they are really like, and that was definitely not always the case before.