British politics has made for fascinating theatre in the fallout of the Brexit referendum. Like many others, my interest was caught by the accidental recording of former Chancellor of the Exchequer, Ken Clarke’s comments about Theresa May being a ‘difficult woman’. It occurs to me that the same behaviours that get Mrs May marked out as difficult are completely accepted, even admired and encouraged, in male leaders. The trending of the hashtag #BloodyDifficultWoman is testimony to the fact that there are lots of us out there who believe that being ‘difficult’ in this sense, is not necessarily a bad thing.

In contrast, on the opposition benches, we have Jeremy Corbyn’s bid for a different, gentler style of politics earning him a good deal of cynicism and criticism. Mr Corbyn’s values-based approach has the hallmarks of an MBTI Feeling (F) Type, more commonly associated with women; while Theresa May’s tough and no-nonsense approach has the look of a Thinker (T), a preference more commonly associated with men. Neither conforms to the gender stereotype and both are under fire for that.

Of course that’s not all there is to the complexities of how our political leaders are viewed by their own party and the population at large, but it is interesting to consider how these same dimensions might be playing out in organisations – where in most countries we still have a massive imbalance in gender ratios in the top jobs.

Research has shown that the T-F distribution in the population does have a bias in the expected, gender-stereotyped direction. However, it’s only a 60/40 split – rather less skewed than most people expect, and much less than popular commentary would have us believe. For example, John Gray’s best-seller, ‘Men are from Mars, Women are from Venus’ makes some excellent points – but as a female Thinking Type, I always found its message a little difficult to buy into. It was clear to me that I often don’t conform to this expected pattern of female behaviour.

Highly effective leaders can be found in all 16 Myers-Briggs Types.

The most successful leaders, whatever their MBTI personality Type, make the most of their own personal style, whilst appreciating the need to adopt a full range of perspectives and behaviours. They maximise their leadership effectiveness through self-awareness and development. 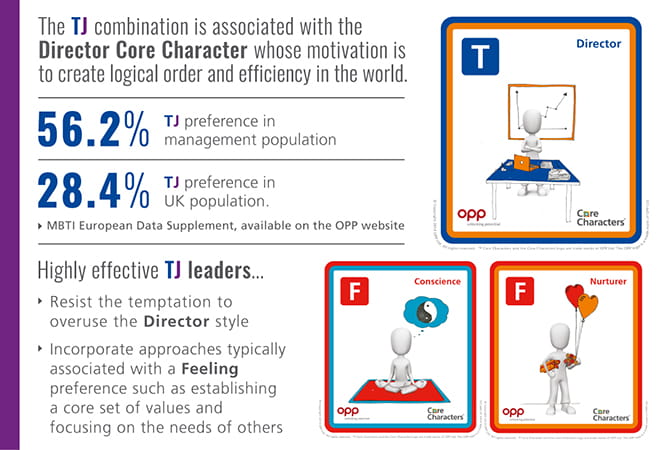 What we’re talking about here is diversity of personality as well as gender.  Because TJs are so prevalent in management, people often get the idea that this might be the best or even only way to manage.  It’s not!  And even if the TJ Director style is your preference (whatever your gender), you need to avoid over-using it and should know how to flex into other styles.

It is thankfully no longer acceptable to say that men should exclusively occupy leadership positions, but yet just beneath the surface implicit biases continue to operate. When we downplay or undermine a leader’s effectiveness because they don’t conform to gender stereotypes or our sometimes unfounded biases about the personality of a good leader, that’s just as damaging as overlooking someone on the basis of their gender or race. It does an enormous disservice both to those individuals and also to the organisations needing leadership. We must select our leaders on the basis of their competence to do the job, and develop would-be leaders to have such competence.

Ken Clarke’s off-guard comments did at least show appropriate respect for our new Prime Minister’s competence, despite what he said about her being ‘difficult’. In any case, the world now watches and waits to see what kind of Prime Minister Theresa May will actually be.

The OPP Consultancy team can help you both select and develop leaders in your organisation. Get in touch to find out how we can work together on your executive selection and development.

You can download the MBTI European Data Supplement for yourself by logging in and visiting the practitioner resources area of the website.

Introduction to Type and Leadership

Introduction to Type and Leadership by Sharon Lebovitz Richmond - more information about the gifts and potential blind spots of all 16 MBTI leadership styles.