In this week’s blog we’re focusing on what happens to us under severe or prolonged stress.

If you’re new to this series, OPP has been releasing new content to make the power of MBTI Type dynamics theory more accessible, and in particular in April we are marking Stress Awareness Month with resources to support an understanding of the stress process for different personality Types. Each blog in this series is accompanied by free resources for MBTI practitioners. We’ve already released ‘Introducing the Core Characters of Type’, ‘Decoding communication issues between MBTI Types’ and ‘Everyday stress: using Core Characters to understand what happens’.

So, what happens when everyday stress builds up to breaking point?

Readers familiar with this aspect of the MBTI framework will know this form of stress as being in the grip of your inferior function. There are many excellent resources available on this topic, particularly the writings of Naomi Quenk, with whom many of us at OPP have had the opportunity to work over the years. OPP’s addition to this fantastic body of knowledge is the creation of this set of illustrations of the Core Characters in the grip.

But what do we mean by in the grip?

When we are under pressure, we tend to fall back on, and start to over-use, our usual preferred style of operation – our leading Core Character or dominant function. If the stress is too extreme or continues for too long, we will exhaust all the energy of our dominant function and our psyche flips into the opposite Core Character – our inferior function. In Type dynamics terms, we are caught in the grip of our inferior function. That is, we are taken over by the least preferred and least practised part of our personality. People experience this process as being overwhelming, finding that they behave and feel quite unlike themselves, which often comes with a degree of embarrassment or remorse.

Let’s look at a couple of examples.

The Core Character for ENTP and ENFP is the Explorer. In our last blog, we already saw how the Explorer becomes overworked and exaggerated under everyday stress. Under severe or prolonged stress, the Explorer character can become overwhelmed by small details, obsessing about them quite irrationally. This is being in the grip of Introverted Sensing, which is the Conserver Core Character – but in an immature, poorly practised and obsessive form. It is quite unlike the way that this Core Character appears for ISFJ and ISTJ types, where it is their favourite mode. 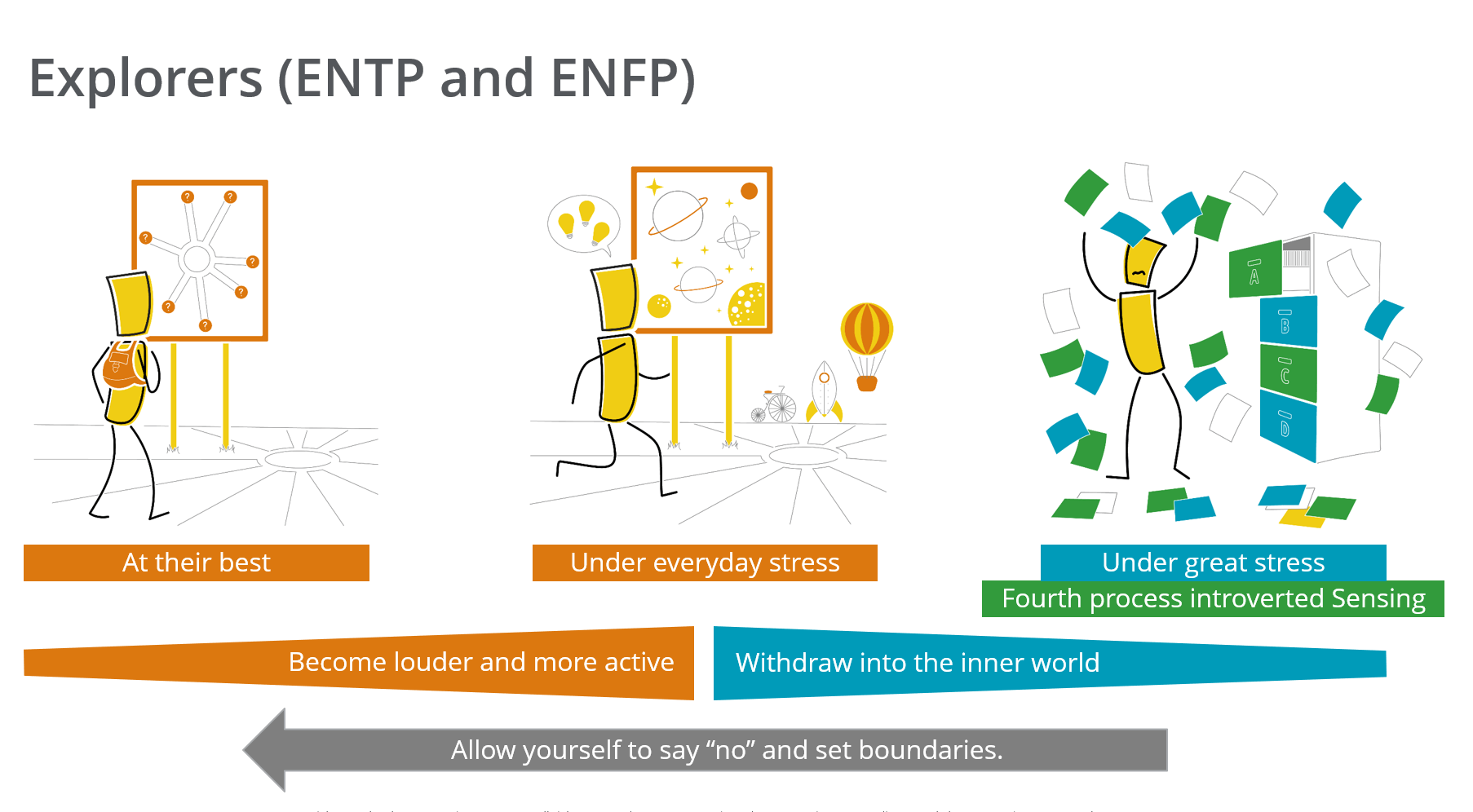 In contrast, the Analyst Core Characters (INTP, ISTP) under everyday stress become over-reliant on thinking things through logically and seeking the perfect solution. But under severe or prolonged stress, the Analyst can succumb to the grip of Extraverted Feeling, which is the Nuturer Core Character. But again, it is very different from the way that this character is expressed when it is a favourite, as it is for ESFJ and ENFJ Types – it involves an angry lashing out at people, usually those closest to them, and particularly when ‘provoked’ by someone trying to jolly them out of their deep solitary analysis. 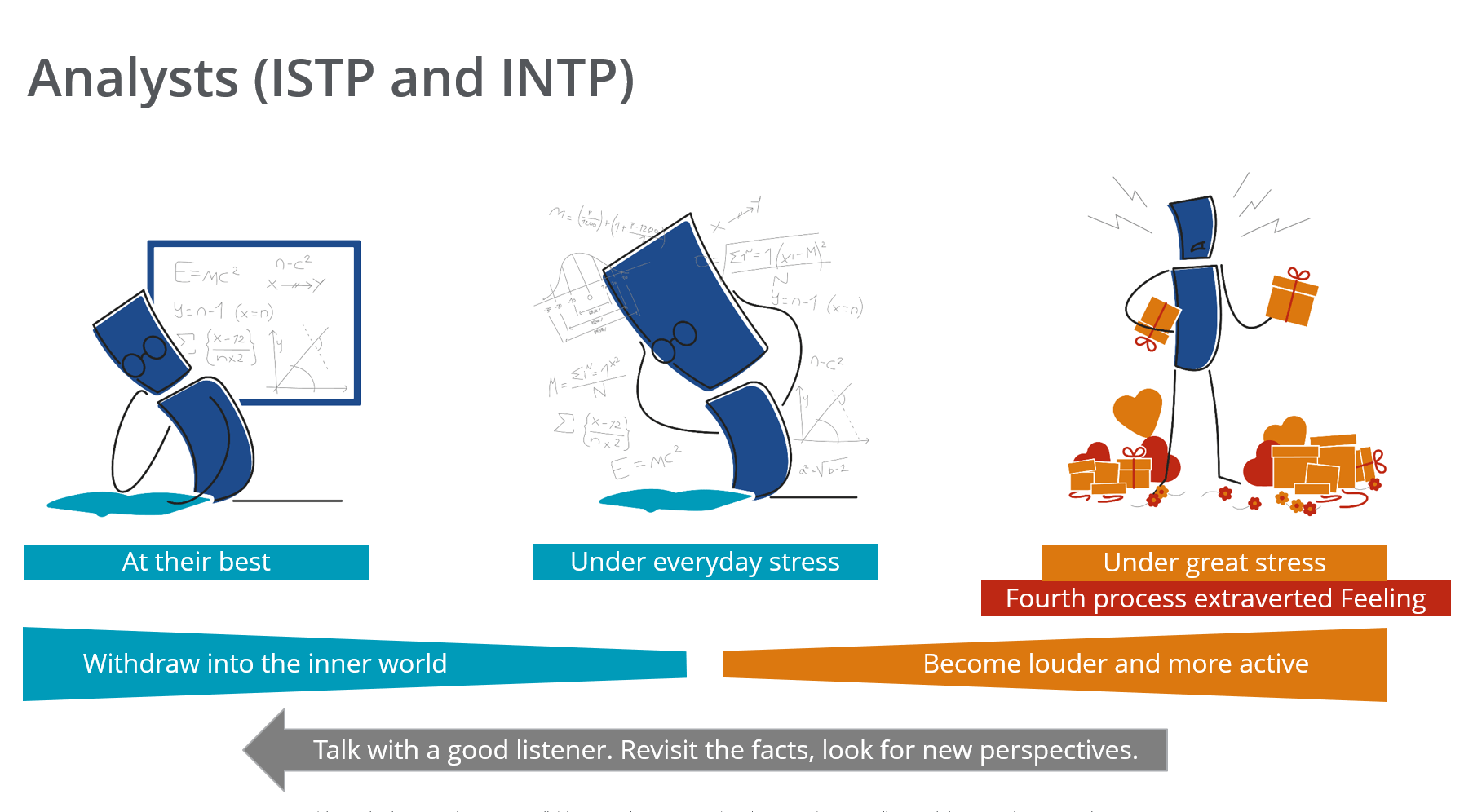 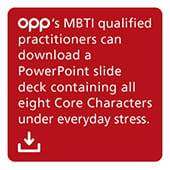 The most observable characteristic of each Core Character in the grip is that Extraverted Types become very quiet, and Introverted Types lash out angrily. So this imbalance of Extraversion and Introversion that we spoke of in relation to everyday stress is also present – albeit in the opposite direction. Similarly, all Types under severe stress lose their usual balance between taking in information (Perceiving) and making decisions (Judging), remaining stuck in just one mode – and a pretty dysfunctional one at that.

In our final blog in this series, we’ll expand on hints and tips about how you can recover from stressful experiences, both everyday stress and these more rare and significant grip events.

If you’ve found this series helpful so far then please leave a comment below. We are always keen to hear your thoughts.

More on Core Characters and stress 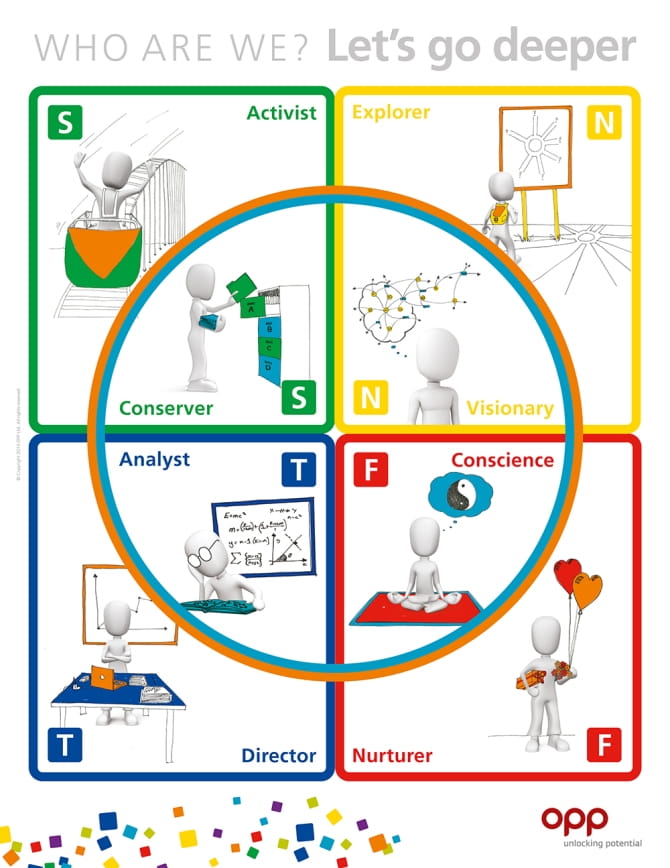 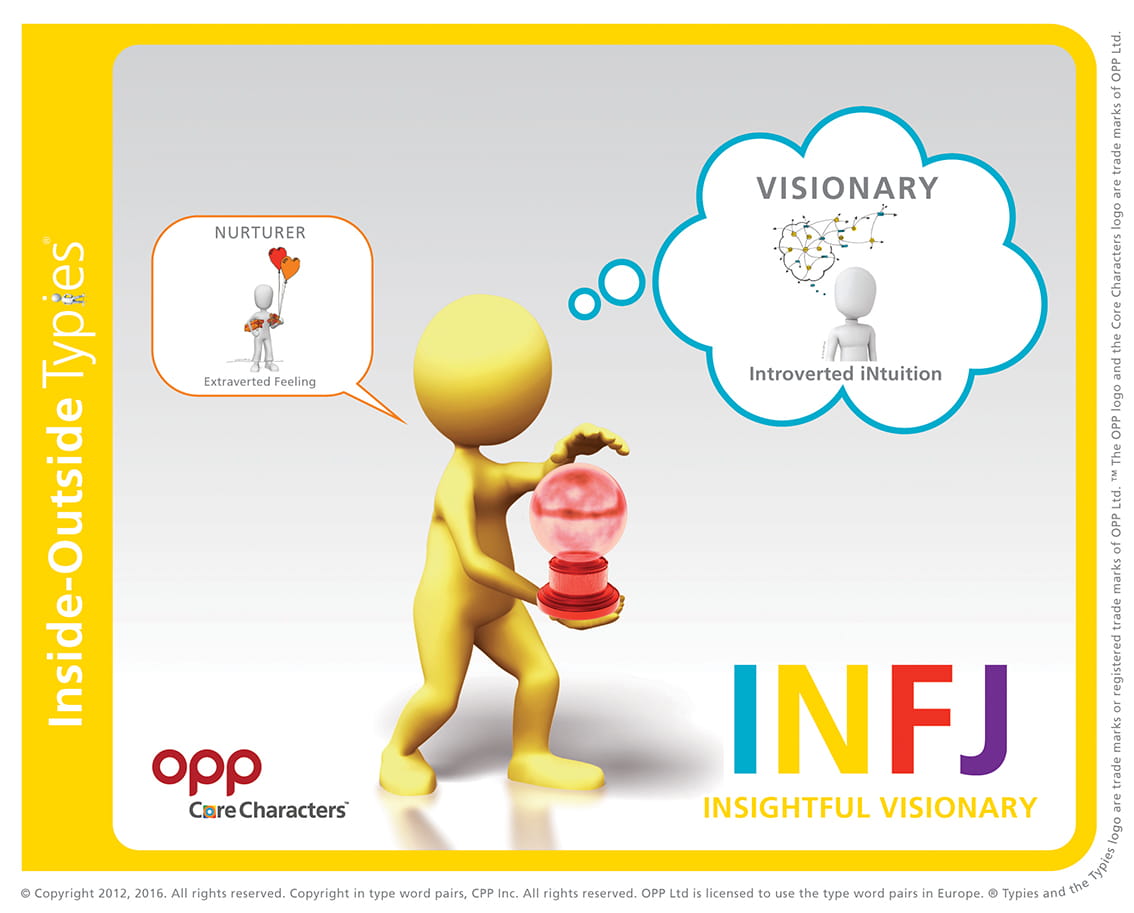 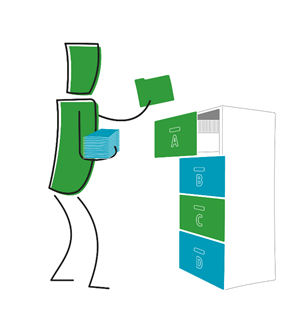 Core Characters and Everyday Stress
What actually happens to us under
everyday stress? 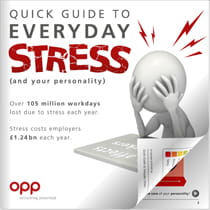